Against the backdrop of social revolution resulting from the Vietnam War and the civil rights and feminist movements, the 1960s saw the evolution of the consumer, advances in store design, the addition of pharmacies in supermarkets, and the birth of discounting. There were also some notable mergers and acquisitions to add even more interest to a dynamic decade.

It was an unsettled time in America that saw the nation on the brink of nuclear war during the Cuban missile crisis. Life went on for Americans, though, and by the end of 1964, grocery store sales were up over three times more than the population growth rate since 1959, according to a special report that was published in the January 1965 issue of Progressive Grocer. Food retailers were now ringing up $61.8 billion in sales — a five-year gain of 24%. One of the most significant achievements was that the sales gain occurred without any appreciable increase in food prices. 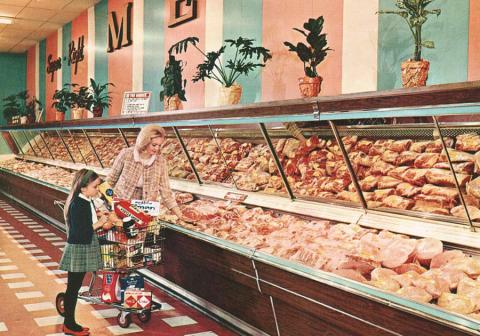 A&P and other grocers jazzed up their décors with more color and patterns.

PG’s editor at the time, Robert Mueller, noted, “This dramatic comparison is not only direct and powerful testimony to the truly competitive nature of food distribution, but it is also, in our opinion, a reflection of the constant drive for more and more efficiency and greater cooperation within this biggest U.S. industry.”

However, Mueller also called out a major threat to the industry’s growth: government involvement. At the time, the new consumerist movement in America was taking a closer look at where people were shopping and what they bought, and why prices differed so greatly from store to store. Consequently, unit pricing and open-code dating were introduced after the Federal Fair Packaging and Labeling Law (commonly known as the “truth in packaging law”) was passed in 1966 to prevent deceptive packaging and labeling, to assist consumers in obtaining accurate information about quantity and contents, and to enable them to make value comparisons.

Mergers and acquisitions were heating up in the 1960s. Here are some of the key deals that were made.
• In 1961, First National Supermarkets, a chain based in Ohio, purchased the 164-store New York division of Safeway.
• In 1964, Jewel Tea, of Melrose Park, Ill., entrenched itself in New England with the purchase of 35 Star Markets in Boston.
• E.J. Korvette, at the time the nation’s largest discounter, with 37 department stores and 21 supermarkets, acquired Hill’s Super Markets, a 44-store chain operating on Long Island, N.Y.
• Albertsons entered California by acquiring Greater All American Markets, based in Los Angeles.
• In 1966, Supermarkets Operating Co. and General Supermarket, the two largest members of the ShopRite cooperative, merged. The new chain was called Supermarkets General Corp.
• In 1968, Wakefern Food Corp. and Supermarkets General ended their affiliation, and Supermarkets General changed the name of its 78 stores to Pathmark.

Some supermarkets reacted to the consumer movement by establishing consumer departments to begin a serious dialog with their shoppers. Giant Food, of Landover, Md., hired the industry’s first consumer advocate, Esther Peterson, in 1970, and worked with the government and industry to develop and test consumer programs.

In addition to engaging more with their customers, retailers placed more emphasis on store décor and their perishable departments.

Many chains looked to design stores that would be instantly recognizable, such as A&P’s colonial-themed stores and the towering signs of Pennsylvania’s Food Fair and California-based Lucky Stores.

Inside stores, dropped ceilings showcased dramatic lighting fixtures, and more creative layouts featured carpeted or patterned floors, as well as colorful graphics and murals. Stores were close to 30,000 square feet on average by the end of the decade.

The service deli became a popular feature, and multitiered dairy sections began to handle a wider array of products. On-site bakeries were a bragging right on their own as progressive retailers trained personnel to prepare fresh baked goods daily.

Wine and liquor departments featuring both domestic and imported labels became more common, and some grocers began providing suggestions for selections based on meals.

The decade also saw supermarkets getting into the pharmacy business. In 1961, Jewel Tea, which had established itself in the Midwest, acquired Osco Drug (the company wasn’t officially known as Jewel-Osco until 2010, however). Its strategy was to build supermarkets connected to drug stores. The following year, Giant Food built its first combination food store and pharmacy. Later in the decade, Acme Markets, of Philadelphia, acquired a 46-store Pennsylvania drug store chain, and Albertsons entered into a partnership with Skaggs Drug Centers Inc. to open combination food and drug stores.

The Birth of Discounting

In 1962, three retailers that would eventually have a huge impact on the industry opened their doors, giving birth to the discounting movement: Walmart, Kmart and Target. That same year, Meijer opened its Thrifty Acres supercenter concept.

It was a good time to focus on low prices. Suburban shoppers were fed up with higher grocery bills and engaged in a “housewives’ boycott.” With inflation beginning in earnest in 1966, supermarkets reacted by lowering prices and experimenting with discounting strategies. Stores in almost every market employed such tactics as price comparison advertising.