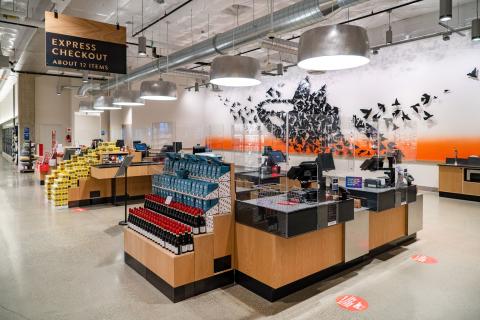 PCC's Bellevue, Wash., store is one of three so far to receive Living Building Challenge Petal Certification; the other two are in West Seattle and Seattle's Ballard neighborhood.

“By working with ILFI to reduce harmful chemicals in our stores and in reusing materials rather than sourcing new, PCC is taking small but important steps for the health of our staff, local communities and our planet,” explained Brenna Davis, PCC’s VP of social and environmental responsibility. “When building our new stores to be LBC Petal-Certified, we are working toward our vision to inspire and advance the health and well-being of people, their communities and the planet.”

“PCC is showing people what a Living Future looks like, setting the tone for the whole sector,” noted Lindsay Baker, CEO of the ILFI, a Seattle-based global nonprofit organization. “With these new stores, PCC is building on its long history of putting the health of its workers and members at the center of its business practices.”

Additionally, the West Seattle and Bellevue stores both feature pieces by local artists aiming to embody the spirit of each neighborhood. In West Seattle, Celeste Cooning’s Cloud Wave installation was assembled from a reclaimed sailcloth to represent the essential life force of water, while Shogo Ota’s Murmuration in Bellevue showcases a flock of birds that while small individually, become mightier when they fly together, taking the form of a Southern Resident Killer Whale.

PCC will seek LBC Petal Certification for its other locations, including the upcoming Kirkland relocation and Downtown Seattle store. To that end, the co-op is taking part in ILFI’s Volume Pilot Program, which boosts efficiency when certifying several projects at one time by evaluating store design and materials at a portfolio scale.

In addition receiving LBC certification for three of its stores so far, PCC ranked 18th on the Environmental Protection Agency’s Green Power Partnership Top 30 Retail list this year and has also been working toward a more sustainable future by discontinuing the sale of plastic bottled water in packaging smaller than 1 gallon, teaming with Ridwell for local cork-recycling efforts, and supporting the Call 4 Climate Now campaign organized by The Climate Collaborative.

Seattle-based PCC operates 15 stores in the Puget Sound area, including the cities of Bellevue, Bothell, Burien, Edmonds, Issaquah, Kirkland, Redmond and Seattle. Besides the Kirkland relocation and new store in Downtown Seattle mentioned above, the co-op plans to open a new location in Madison Valley. In 2020, PCC gave more than 60% of pre-tax earnings to members and the communities it serves.