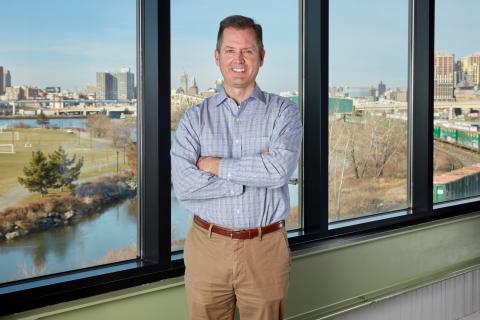 It may seem hard to believe, but FreshDirect, the Northeast’s leading pure-play online grocer, is celebrating its 20th anniversary. To mark this milestone occasion, Progressive Grocer Managing Editor Bridget Goldschmidt spoke with FreshDirect Managing Director Dave Bass on how the Bronx, N.Y.-based company, acquired last year by Ahold Delhaize, began back in 2002 and where it’s headed, along with the future of e-grocery in general.

Bridget Goldschmidt: Talking about the 20th anniversary, I thought it might be interesting to go back to the start, recount the beginnings of FreshDirect and how the business actually got started. First of all, were you there at the beginning? And even if you weren’t, how did the company get off the ground?

Dave Bass: It’s easy to forget how far we’ve come in 20 years. I was not there at the very start, but I’ve heard lots of stories. Sometimes I feel, with some of those stories, like I had been there. I guess the easy way to think about it is that this was truly a startup approach in how we could build a business in a new and different way. [We] were originally located in Long Island City, which is within the greater New York City area. But [it was] very much a manual process, figuring things out as [we] went, and not really the higher-tech, more digitally enabled version of FreshDirect that we have today. However, that manual process allowed folks to really figure out what was important for customers. We really had to make sure that [we] were creating a business that would really satisfy those needs, both today and then in the future.

So, if you think about what that base created, the interest in culinary innovation, restaurant-quality foods and meals, and really high quality, which is what our consumers in this market expect from us, became foundations for us that have continued forward into our, I’ll still call it a newer facility here, that we moved into in The Bronx in 2018. So those are some of the reflections I know this team has whenever we chat about some of the original days back 20 years ago.

BG: Speaking of that, getting to know the shoppers and their likes and dislikes, what type of shoppers did you target at the beginning, as opposed to now? And tying into that, what types of grocery products do shoppers tend to buy via FreshDirect compared with now? And why do you think this is?

DB: I think the original view of who the core shopper [was] going to be for FreshDirect was more of a restaurant replacement visit. What evolved was the realization that customers saw an ability to do a fuller shop with FreshDirect. What’s evolved since those initial customers is that, certainly, the restaurant-quality ready-to-eat meal is still a very strong part of our business. It’s amazing how good it is. We have, frankly, fantastic product that our customers have come to love. At the same time, our customers, and some of it’s just been the evolution of the American shopper as well, but particularly strong in this market, we’ve seen people much more interested in organic. Much more interest in consistent high quality. That’s the key: not just high quality, but to do that every single day. And also health and wellness. That’s really been an evolution we’ve seen.

Also … FreshDirect, from the very beginning, has been very focused on innovative and new products, niche products that have become national over time. That’s another area that has continued to be strong for us. If I look today at the FreshDirect business versus a broader, more mainline grocer, we do actually more than 60% of our business on the fresh side. About 40% is on the center store packaged good side. So, very much a flip from what you would expect from a mainline grocer, and very representative of who and what our customer is. Frankly, what FreshDirect is [comes from] our desire to fulfill our customers’ needs every day.

BG: What kind of growth has the company experienced since its inception? We know it’s spread out to all these different markets now [the New York metro area and Washington, D.C., as well as areas of Pennsylvania and Delaware], but if you could talk about that in as much detail as you care to.

DB: We certainly, as did many of our competitors, saw just an incredible spike during the core of the COVID pandemic, ’20 and ’21. Not just incredible growth, but I’ll say almost instantaneous incredible growth. It wasn’t like the growth rate accelerated; it was really almost a straight line up. That created a lot of needs here to make sure that we could satisfy that demand, support our customers, support new customers who wanted to shop with us. We also actually did some outreach to the city with donations and support when food was really at a premium for folks who didn’t have the ability to get what they needed.

That COVID spike really further accelerated our business. What’s exciting for me is that this year, we expect further growth, which, when you think about what’s going on with COVID and people starting to return back to a little bit of their more typical life pre-COVID, we’re really pleased there’s been some stickiness there with our consumers, our new consumers, who truly understand our approach to fresh, our approach to restaurant-quality meals, and just the consistency with which we do all that. That’s really what we’ve seen over the past few years and a little bit of what we’re seeing this year, too. 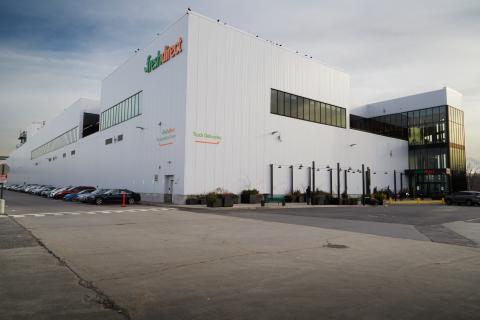 FreshDirect moved into its Bronx, N.Y., facility in 2018.

DB: The shift from Long Island City to our facility here in The Bronx was the largest change that we’ve had, for a number of different reasons. First off, it’s a highly automated facility that we have here, along with obviously lots of the employee team that work to make it all come to life. That automated facility that we have here really upped our game in terms of how consistently we could deliver those groceries. We have, I think it’s 37 different temperature zones, to make sure that our temperature zones match the product, so we don’t have to worry about a consumer shopping in store and therefore keeping it warmer. We can just worry about what’s right for the product. Then we’ll give our employees the right equipment to work within that environment as well. So, the largest shift that we have had is the move to this facility. That’s No. 1.

No. 2, I think this is probably both for us and for e-grocery in general, is that the ability to understand the data that we can collect, and to quickly analyze that and understand how to better serve our customers, certainly has progressed along with computing power and a lot of the software packages that are out there today. We’ve been certainly a beneficiary of that. I would argue that I think FreshDirect has done that in a more unique way because of the more intimate relationship we have with our consumer base here. Food is really a core element for consumers, whether it’s health and wellness, or family get-togethers, or birthday parties. We really view it as a trust relationship that gives us an opportunity to do some different things and to really make sure we’re meeting our consumers’ needs.

BG: Moving on from that, what do the near future and the next 20 years look like for FreshDirect, do you think? And for the e-grocery business in general?

DB: We always start with the consumer. That’s really our primary focus, and that’s always where I start with these conversations. What we believe is that the consumer that I described earlier that really appreciates what FreshDirect does every day, I think is going to continue to be focused even more around healthy and organic products. We’re seeing that with current trends. They’re going to expect, [us to] solve their problems in a consistent and simplified way. Their expectations around things like web and mobile apps, the interaction there is really important. The communication we have with them needs to continue to evolve. I think those things will continue to grow and expand, and I think FreshDirect is well positioned there.

In other areas that we’re really excited about, when it comes to digital and technology, the ability for us to continue to become more efficient and therefore have a better environmental impact, a better impact on our communities when it comes to things like transportation routing and our network. That’s an area that we’re really focused on and believe there’s an ability for us to help our community, help our customers and become more efficient, which allows us to continue to keep our prices where we want to, which is good. Then I think the last area is sustainability. That’s something that in the past few months we’ve really dug into pretty hard. As I mentioned, we’re located right here in The Bronx and we’re really interested in making sure that we’re supporting our communities as best we can.

We’ve done some really good work. Likely by the end of this year, potentially early next year, we’re going to install a solar array here on the roof. Taking a number of steps like that, to really advance the sustainability question for us, [is something] we’re excited about. Again, we believe it’s right for our community, right for our customers and a good thing for all. Those are the areas that we’re looking at [to] continue to advance in the next 20 years.

Again, I’ll go back to the customer at the end here, too. At its core, the customer will shift and adjust perhaps in ways that we don’t know today. But if we continue to have the dialog that we have been having with them and listening and learning from that, we believe we can continue to evolve as our consumer does, which for us is the most important thing we can do across our entire business.