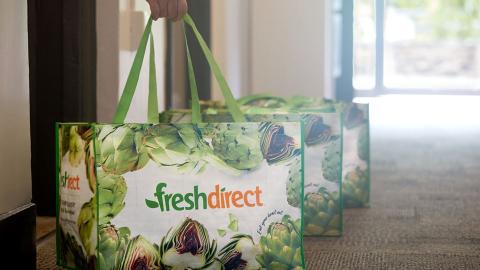 FreshDirect will retain its brand name and continue to independently operate out of its facility in New York City.

A new era begins for FreshDirect after Ahold Delhaize said it received regulatory approval and closed on its acquisition of the food delivery company.

Now after receiving regulatory clearance from the U.S. Federal Trade Commission, Ahold Delhaize is officially able to acquire the majority share, funded by cash on hand, and Centerbridge Partners is a minority equity investor with a 20% stake. Financial terms of the deal were not disclosed.

“We are very pleased that we can now definitively welcome FreshDirect to our family of great local brands,” said Frans Muller, Ahold Delhaize’s CEO. “This leading local online brand with a large and loyal following will help us reach additional customers in the New York trade area and further propel our omni-channel evolution. We are looking forward to working with our new FreshDirect colleagues.”

FreshDirect will retain its brand name and continue to independently operate out of its New York City facility.

"Today marks the beginning of an exciting new era for FreshDirect,” said David McInerney, FreshDirect’s CEO. “Ahold Delhaize will build on FreshDirect’s success, ensuring the continued growth of our company, while creating synergy and maintaining the uniqueness of the brand. I am thankful to our loyal and devoted customers, many of whom have been with us since the beginning, and very proud of and grateful for the FreshDirect team, which has worked tirelessly over the years to make our company a leader in the field. The entire FreshDirect team looks forward to working together with our new Ahold Delhaize colleagues.”

“We are excited to start this new partnership with Ahold Delhaize, in which we can utilize our experience in the interplay between logistics facilities and e-commerce fulfillment in order for FreshDirect to grow further,” added Steve Silver, senior managing director at Centerbridge Partners.

With offices in New York and London, Centerbridge Partners is a private investment management firm employing a flexible approach across investment disciplines in an effort to find the most attractive opportunities for its investors and business partners.

Ahold Delhaize USA, a division of Zaandam, Netherlands-based Ahold Delhaize, is the parent company for Ahold Delhaize’s U.S. companies, consisting of Food Lion, Giant Food, The Giant Co., Hannaford, and Stop & Shop, as well as e-grocer Peapod; Retail Business Services, a U.S. support services company providing services to the brands; and Peapod Digital Labs, its ecommerce engine. Operating more than 2,000 stores across 23 states, Ahold Delhaize USA is No. 11 on The PG 100, Progressive Grocer’s 2020 list of the top food and consumables retailers in the United States.