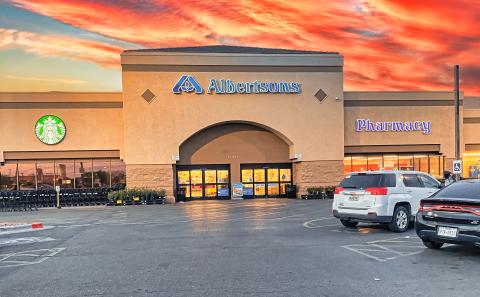 Uber Eats is available at nearly 800 new Albertson banner locations for the first time ever in such states as Connecticut, Indiana, New Hampshire, Utah, Vermont and Rhode Island.

Albertsons Cos. and Uber Technologies Inc. have expanded their partnership to include more than 2,000 of the grocer’s banner stores nationwide, among them Albertsons, Safeway, Jewel-Osco, Acme, Tom Thumb and Randalls. The expansion makes Uber Eats available at nearly 800 new Albertson banner locations for the first time ever in such states as Connecticut, Indiana, New Hampshire, Utah, Vermont and Rhode Island.

To facilitate this growth, Albertsons stores are more accessible within the Uber Eats app than previously. Now, in addition to stores being found within Uber Eats’ grocery category, consumers can order items for delivery through “express” lanes within the app’s convenience section. Uber One members pay no delivery fee on all convenience orders from Albertsons “express” stores with a $15 minimum purchase.

“Together with Albertsons, we’re evolving the ways we can get groceries — and so much more — to people’s doorsteps across the country,” noted Oskar Hjertonsson, head of grocery at San Francisco-based Uber. “Since launching our U.S. grocery category in 2020, we have seen a huge appetite for easy, fast delivery from trusted retailers, and with this expanded partnership, we’re excited to serve more people with even more choice and convenience on Uber Eats.”

“Our growing partnership with Uber Eats brings new convenience to shopping our stores,” said Amber Kappa, VP of business development and innovation, digital at Albertsons. “Our goal is to make it easier for people to get their groceries, so they can focus on the goodness of sharing a meal.”

Later this year, consumers can take advantage of Albertsons member pricing and promotions on grocery orders from the grocer’s banners, where available. Local banner loyalty program members, including Albertsons for U and Safeway for U, will be able to link their accounts in the Uber Eats app to earn loyalty points on purchases.

Since introducing its grocery offering in July 2020, Uber has seen steady growth in the United States.In the past year alone, the company has added more than 120,000 non-restaurant retailers to the platform in this country – a 64% year-over-year increase.