Last-mile delivery seems to be cooling down. Literally.

Ecommerce giant Amazon.com reportedly is developing a smart doorbell service that would give delivery drivers the ability to, with the push of a special doorbell, enter a person’s house to drop off deliveries, CNBC reported, citing two people familiar with the matter. The news broke the same time as reports that the Seattle-based company is in “advanced talks” with San Francisco-based smart-license-plate-maker Phrame to develop a solution that allows for direct-to-trunk delivery.

The doorbell would allow delivery drivers one-time access to a person’s home to drop off items, making sure valuable items are not left unattended for hours on the doorstep, where they can be stolen. Phrame’s product would fit around a license plate and contain a secure box that holds car keys, allowing users to open the box with their smartphone or grant others access to it remotely.

While CNBC reported that, according to San Francisco-based smart doorbell provider August Home, 11 million U.S. homeowners had a package stolen in 2016, and a survey by Shorr Packaging showed 31 percent of U.S. shoppers have experienced package theft, this may prove to be just part of the reason behind the initiative. 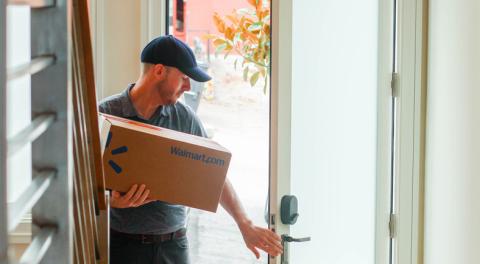 As many watching the industry know, Amazon and Walmart have been playing a game of innovation one-up as of recent, pushing to offer the latest and greatest ways to make it easier for shoppers to get what they want, when, where and how they want it. And Walmart recently offered something Amazon doesn’t offer: direct-to-fridge grocery delivery.

Walmart is testing the new idea with August Home in Silicon Valley with a small group of the provider’s customers. To use it, Walmart customers place an order on Walmart.com for items, including groceries, which will be retrieved and transported by a driver from Menlo Park, Calif.-based same-day-delivery provider Deliv. If no one responds to the doorbell, a one-time, preauthorized passcode can be used to enter the home and complete the delivery, all while allowing the customer to monitor the delivery in real-time via a security system feed through their smart devices.

It makes sense that retailers are going to find ways to get groceries directly into the house and the fridge, and not just because of theft: Recent research and observations have shown that grocery delivery will see greater adoption in the United States when grocers crack the code for true fresh-focused operations.

During a June 14 panel discussion at Pulse 2017, a grocery-technology-focused event hosted by Progressive Grocer and the Food Marketing Institute, Linda Crowder, senior director of Peapod Interactive at Ahold Delhaize's Peapod subsidiary, based in Skokie, Ill., noted that the future of grocery delivery “is going to be where fresh goes,” meaning that when fresh is perfected in delivery, consumers will go from once-in-a-while users to loyalists. Meanwhile, a June report from The NPD Group, of Port Washington, N.Y., revealed that the prior month saw only 7 percent of U.S. consumers shopping online for groceries, as they didn't have much control over their fresh purchases.

Granted, CNBC’s report speaks of direct-to-in-home delivery instead of direct-to-fridge, but one can make the jump that if a delivery person is already inside the home with perishables, it would make sense to store those in the fridge (or perhaps the garage or car trunk, if it’s cold enough outside). If retailers such as Walmart and Amazon can pull this off – and somehow overcome shoppers not being able to see the fresh items selected (via smartphone, for example) while also driving down high costs associated with delivery, two other barriers to adoption – then they just might be able to finally launch the first truly fresh-focused delivery model that will see widespread adoption. Of course, that's one mighty big if.