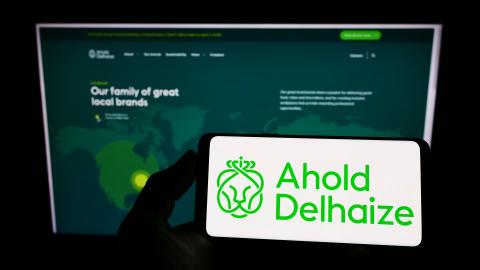 In the United States, Ahold Delhaize's net sales were $12.9 billion, an increase of 5.8% at constant exchange rates, and up 13.6% at actual exchange rates.

Q1 group comps had a net negative impact of about 0.5 percentage points from weather and calendar shifts, mainly relating to the timing of Easter. Group net consumer online sales for first quarter declined by 1.0% at constant exchange rates, as growth in the United States was offset by the cycling of a strong Q1 2021 in Europe arising from last year’s lockdowns and the subsequent reopening of societies during the quarter.

“I am pleased to report a strong start to the year for Ahold Delhaize,” said Ahold Delhaize President and CEO Frans Muller. “In times like these, our strong global portfolio of local brands provides distinct competitive and societal advantages. This allows us to successfully navigate short-term market volatility and, at the same time, provide financial stability and operational bandwidth to focus on our long-term growth agenda.”

In the United States, net sales were €12.2 billion (U.S. $12.9 billion), an increase of 5.8% at constant exchange rates, and up 13.6% at actual exchange rates. According to Ahold Delhaize, sales also benefited from favorable foreign currency translation rates, last year’s acquisition of stores from Southeastern Grocers, and higher fuel sales. U.S. comps excluding gasoline rose 3.3%, partly offset by an unfavorable Q1 net impact to sales of 0.6 percentage points for the same reasons noted for the group’s comps. Brand performance continued to be led by Food Lion, which has now racked up 38 straight quarters of positive sales growth, with close to double-digit comps.

Q1 online sales in the U.S. segment were up 4.6% in constant currency, on top of the impressive 188.3% constant-currency growth logged in the same quarter last year. Underlying operating margin in the United States was 4.4%, down 0.4 percentage points at constant exchange rates from the year-ago period, which Ahold Delhaize attributed to increased labor, distribution and energy costs, partly offset by higher pricing and cost savings initiatives.

In discussing Ahold Delhaize’s U.S. brands, Muller also noted such highlights as double points earned on the purchase of all Guiding Stars-rated items at The Giant Co.; Giant Food’s expansion of its More for You value campaign with the introduction of a bulk-item aisle offering consumers savings on larger-sized products, and Hannaford’s plans to be fully powered by renewable energy by 2024. He further pointed out that own-brand penetration stands at 30% in the United States, andthat the company’s U.S. banners have more than 1,400 pickup points and have added new instant-delivery options with partners.

In the wake of its results, the company now expects underlying EPS to be comparable with 2021 levels – it was previously down by low- to mid-single-digits – with higher-than-expected Q1 earnings, coupled with a more resilient consumer climate in the United States and a more favorable U.S. dollar, forecast to more than offset the challenging economic situation in Europe.

Ahold Delhaize’s family of local brands serves 55 million customers each week, both in stores and online, in the United States, Europe and Indonesia. Together, these brands employ more than 413,000 associates in 7,452 grocery and specialty stores. Ahold Delhaize USA, a division of Zaandam, Netherlands-based Ahold Delhaize, operates more than 2,000 stores across 23 states and is No. 10 on The PG 100, Progressive Grocer’s 2021 list of the top food and consumables retailers in North America.