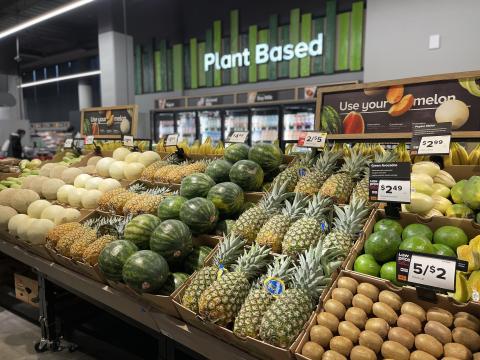 At a Giant Co. store in Philadelphia, Ahold Delhaize showcases its customer value proposition by offering customers healthy, quality and delicious choices in all departments, but especially in the perimeter with fresh.

The grocery industry was abuzz with excitement last month as rumors swirled that Ahold Delhaize was in talks with the Albertsons Cos. on a merger. Whether the rumors are true, Ahold Delhaize CEO Frans Muller has repeatedly hinted that the company thinks that there’s an opportunity for growth in the grocery industry, due to the accelerating pace of consolidation, especially in the United States.

“The whole market will continue to consolidate,” Muller said at IEX Investors Day in Amsterdam in July. “The complexity of this industry is increasing rapidly, and the smaller players are finding it difficult to make the investments that are needed now in sustainability, in innovation, in digitization. Moreover, the tailwind of COVID has fallen away, making it clear who are less well positioned, so only now that consolidation is really getting underway. We have a strong balance sheet, and we are ready to seize our opportunities in the consolidation battle, both on the American East Coast and in Europe.”

In the United States, where the international retail conglomerate operates 2,048 stores, the timing of a merger announced this year would make sense.

Ahold Delhaize USA has been strengthening its position as it looks to take its hyper-local value proposition national. After blockbuster revenue years in 2020 and 2021, Ahold Delhaize has demonstrated that it can keep growing by focusing on omnichannel innovation, prioritizing value and expanding its assortment of high-quality, low-cost private-brand products.

A combined Ahold Delhaize USA and Albertsons Cos. would create the largest supermarket chain in the United States.

“Our brands are laser-focused on helping consumers manage spending by proactively highlighting savings opportunities along the customer journey,” Muller said during the company’s second-quarter earnings call in August. “Powered by data and insights, we do this by providing great value offers via omnichannel loyalty programs, by prioritizing healthy food options through Guiding Stars and Nutri-Score linked promotions, and by expanding the assortment and availability of high-quality, low-cost Own Brand products and bulk offerings.” 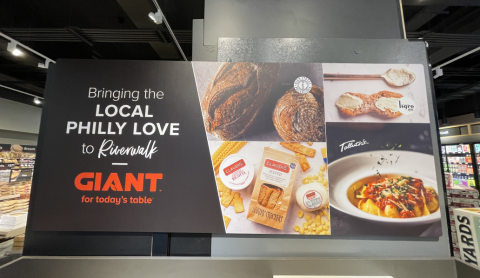 A Family of Local Brands

When it reported second-quarter earnings in August, the company noted group revenue of $22 billion, a 6.4% increase. According to Ahold Delhaize, revenue was driven by positive contributions from same-store sales growth of 4.7%, foreign currency translation benefits, and, to a lesser extent, by the acquisition of DEEN supermarkets in the Netherlands and higher gasoline sales. Group online sales grew 4.8%.

When it reported Q2 earnings in August, U.S. net sales were $14.03 billion, an increase of 7.7%. U.S. comps rose 6.4%. Based on the strength of this performance, Ahold Delhaize raised its EPS to increase by mid-single digits compared with 2021, and free cash flow to be approximately $2 billion compared with the guidance the company gave in May.

In Q2, Ahold Delhaize USA’s Food Lion banner continued to lead brand performance. In fact, Muller said that Food Lion has been the “clear outperformer” in the company and right now is one of the fastest-growing brands in the United States, with close to double-digit comps.

According to Natalie Knight, CFO at Ahold Delhaize, the Stop & Shop brand’s financial performance has been affected by delays in store remodels.

“At Stop & Shop, the challenge has been that we really just haven’t had the opportunity to complete the really aggressive remodeling program that we have envisioned,” Knight said during the Q2 results call. “If we look at Food Lion several years ago, that was really the key to success, in addition to pricing and culture. You got a different look and feel when you went into the store. And when we look at Stop & Shop, that’s something where we definitely have big plans. They have been slower than we would have liked during COVID-19, because it was just hard to meet the technical requirements to do it. We are moving at full speed at the moment. There’s a real focus in terms of what we want to do in the New York area, because that’s the place where ... we believe we can be really impactful and show people what we want to do with the brand.”

In June, Stop & Shop revealed a $140 million remodeling investment across its New York City stores over the next two years. The initiative aims to improve the shopping experience for local customers by adding thousands of new products to the assortment that reflect the diversity of the neighborhoods and communities that Stop & Shop serves, Ahold Delhaize says. 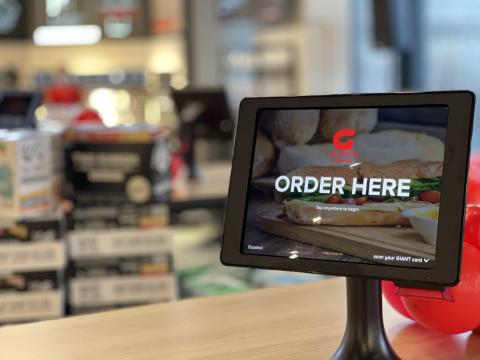 Technology is leveraged throughout The Giant Co.'s Riverwalk store in Philadelphia.

Last year, when Ahold Delhaize held its investor day in November, the company said that it expected its online sales across its grocery banners in the United States and Europe to double by 2025. The grocery chain also noted that e-commerce would be the foundation of an “omnichannel ecosystem” that would generate an additional $10 billion between 2023 and 2025.

So, how’s that going?

Well, in the second quarter, U.S. online sales at Ahold were up 16.4%. Not as strong as the 61% increase in the prior-year quarter, but impressive nonetheless, considering an economic environment in which shoppers are counting every penny due to historic inflation, and e-commerce sales overall have been slowing.

In the United States, Ahold Delhaize now has more than 1,400 online grocery pickup points, and it has also added new instant-delivery options with partners such as Instacart.

“We are looking at how do we work much more collaboratively between Stop & Shop and FreshDirect to really capitalize on the benefits of both of those brands and what they can do to help each other in that area,” Knight said.

In July, FreshDirect, the Northeast’s leading pure-play online grocer, celebrated its 20th year in business (Ahold Delhaize acquired the company in early 2021). The e-grocer said a week later that it would launch its first shopper loyalty program in 2023.

In late August, however, FreshDirect revealed that it would exit the Philadelphia and Washington, D.C., markets. The company said that the move would “allow it to better serve customers in the tri-state market surrounding New York City.” FreshDirect competes with Ahold’s digital-forward Giant Co. and Giant Food banners in those areas, so the move makes sense in terms of increasing efficiencies.

In fact, The Giant Co., which has a new interim CEO, John Ruane, starting this month, has been working this year to make e-commerce more attractive to cost-conscious consumers, including the elimination of order minimums and grocery pickup fees.

“With today’s customers having more choices than ever before, it’s critical that we continue taking steps to differentiate our online shopping experience,” said Matt Simon, VP of brand experience at The Giant Co., when news of these e-commerce changes broke. “Not only do these enhancements accelerate our omnichannel strategy, but they also provide our Giant Direct and Martin’s Direct customers with greater convenience and value, uniquely positioning Giant Co. as an online grocer of choice.”

Last November, The Giant Co. opened a new state-of-the-art direct e-commerce fulfillment center in Philadelphia to serve more customers in that city and — for the first time in its 98-year history — southern New Jersey. 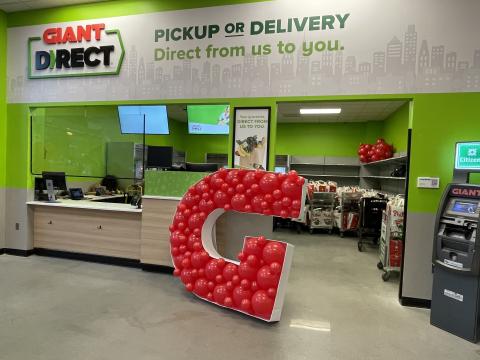 The Giant Co. eliminated order minimums and fees for online shoppers who use Giant Direct and Martin’s Direct services for pickup.

Ahold Delhaize USA has been busy putting into place a supply chain transformation plan since 2021, a three-year journey to establish an integrated self-distribution network to support the division’s omnichannel growth. In March, the company shared that it had converted a facility into a self-managed network in Bethlehem, Pa., bringing the total number of network facilities to 21.

“The conversion of the Bethlehem facility is an important milestone,” said Bob L’Heureux, VP, supply chain services for ADUSA Supply Chain Services and self-distribution implementation lead, last March. “It’s not only the first facility to convert in 2022, but with the addition of this distribution center, we now have the first facility in the network that serves more than one Ahold Delhaize USA brand. This is an important capability to add as we continue to transform the supply chain network into an integrated, flexible model that supports omnichannel growth for the brands we serve.” 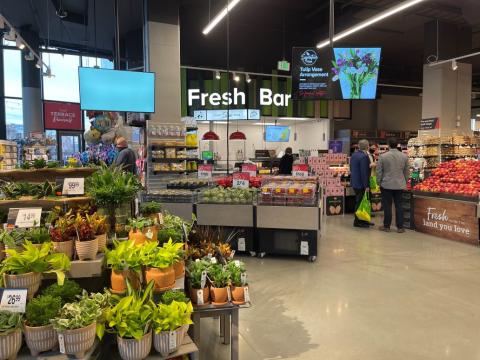 The perimeter at the Riverwalk Giant Co. store in Philly boasts a food hall, a kombucha tap, in-house smoked meats, a dairy department dedicated to plant-based dairy, a smoothie bar (pictured above) and a brewpub.

Buried deep in the Ahold Delhaize Q2 earnings report was a not-so-surprising nugget: The company has achieved 30% private-brand penetration. After all, the company has been working hard to elevate its own brands.

Earlier this year, the conglomerate installed a new leader in charge of private brands, Ian Prisuta, who has hit the ground running trying to meet the company’s stated goal of having more than half of its sales of own brands come from healthy products by 2022.

“In terms of the U.S., we see opportunity for the rest of the year in private label, where in some cases, we have better margins than the rest of our portfolio,” Knight said.

“Through this program, we’re hoping to identify a select number of innovative food and beverage manufacturing companies with products made from high-quality, distinctive ingredients, or healthy options that will appeal to the widely diverse customers of the brands of Ahold Delhaize USA,” Prisuta said at the time. “I’m confident there are suppliers that we haven’t engaged with yet that would be a valuable addition to our private-brand portfolio, and the entire private-brands team is excited for the opportunity to develop new relationships with those businesses.” 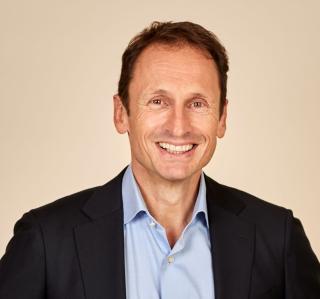 During the two-and-a-half-month Incubator Program, the chosen participants will learn from the company’s private-brands team about its private-brand structure and goals, and will grow their knowledge of the brands of Ahold Delhaize USA. The program will include educational sessions and discussions on best practices with various functional subject-matter experts. Participants will also be paired with their own personal private-brand mentors, who will help them prepare for their final product pitch.

The incubator program is part of Ahold Delhaize’s strong focus on its environmental, social and governmental (ESG) efforts, including Giant Food’s recent partnership with circular-reuse platform Loop, from Trenton, N.J.-based Terracycle, and Dutch retailer Albert Heijn’s rollout of a 100% electric delivery fleet in 2022 for The Hague city center, with Rotterdam, Utrecht and Amsterdam to follow next year. Ahold’s U.S. brand Hannaford also disclosed plans to be fully powered by renewable energy by 2024. Additionally, just last month, the company bolstered its ESG strategy further by appointing Jan Ernst de Groot, already its chief legal officer since 2016, to the additional role of chief sustainability officer. De Groot is well known in the Dutch and international sustainability community, with a track record of leading transformative sustainability programs at companies, and supervisory roles at NGOs and civil society organizations.

“For a long time, sustainability has had a central position in our organization,” Muller said at the time of de Groot’s appointment to the chief sustainability officer position. “It is one of our four key strategic focus areas, and a critical driver of our purpose: Eat well. Save time. Live better. Our activity and performance in this area are attracting increasing interest from customers, (future) associates, investors and other stakeholders. With the appointment of Jan Ernst, we ensure that the full scope and dimension of sustainability and ESG are holistically represented at the executive committee level.”