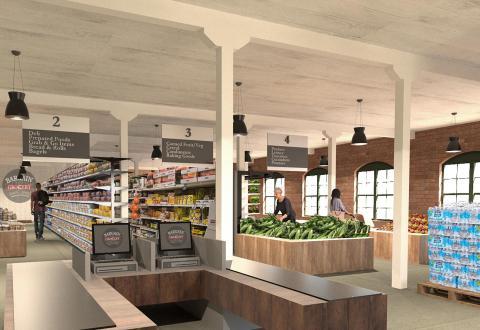 Rendering of the interior of the Bargain Grocery store planned for Troy, N.Y.'s North Central neighborhood.

Community-minded independent retailer Bargain Grocery is planning to open a store in the North Central neighborhood of its hometown of Troy, N.Y. The store will be downtown Troy’s most centrally located large-scale grocery store and provide nutritious foods in an underserved area. Bargain Grocery will anchor regional developer First Columbia’s redevelopment of the entire city block north of Hoosick Street.

“This will deliver not only affordable but healthy food to the community,” said Rensselaer County Executive Steve McLaughlin. “We’re proud to work in partnership with business and government to help make this happen. This is really a store for everyone — all walks of life. It will be a beautiful space, where everyone can shop for food with dignity.”

Bargain Grocery opened its first physical store in Utica in 2018, backed by nonprofit organization Compassion Coalition, which donates more than $20 million in goods annually to the local community. The retailer keeps its prices low with strategic purchasing — it buys fresh food at a discount, either because the food is overproduced or doesn’t meet such superficial standards as aesthetics or packaging issues — as well as extending additional, discreet financial assistance to those in need.

“This part of Troy, where we will be opening, could be considered a ‘food desert,’ so it really fits our mission,” noted Bargain Grocery founder Mike Servello. “Residents of under-resourced neighborhoods don’t have access to the same health food, the same deals that others have. Larger grocers don’t typically go into areas like this, so we’re partnering with other community leaders to do something about this critical problem.”

The North Central neighborhood is in a census district where at least 33% of residents live more than a half-mile from a grocery store. It’s also a low-vehicle access area, meaning that more than 100 households have no access to a vehicle and live more than a half-mile from the nearest supermarket. The neighborhood has a 43% poverty rate, similar to the area surrounding Bargain Grocery's Utica store. The poverty rate for all of Troy is 24.4%, as compared with that of the New York state overall, which is 13%.

The planned location for the store is 558 River Street, across the street from Flanigan Square and near the intersections of NYS Route 7 (Hoosick Street) and U.S. Route 4 (River Street). The site is easily accessible by car, with plentiful off-street parking, and is located on several CDTA bus line routes. The two-story historic brick building, which most recently housed Smith’s Beauty Supply Co., features large arched windows and 20,000 square feet of space that will be rehabilitated to include community prep kitchen space and an upstairs café.

Servello described the products sold at Bargain Grocery as “excellent food. There is so much waste in our food system, it can really make your head spin. Let’s rethink this whole deal with food and waste, and let’s make sure everyone is able to shop with dignity.”

The profits from Bargain Grocery in Utica have not only funded community giveaways of food, but also mattresses, clothes and other household and essential goods, a model the organization plans to replicate in Troy.

According to Barone, Bargain Grocery hires workers from nearby communities who face barriers to employment, including refugees, people with disabilities and those who have overcome addiction issues. The store also offers cooking and nutrition classes taught by local volunteers.

The Troy development project appeared before the city’s planning commission at its Aug. 18 meeting for conceptual review, which was approved, and will appear before the commission again in a month to review further details.