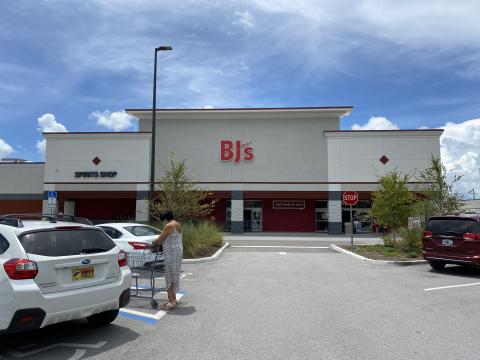 BJ’s Wholesale Club grew sales, revenue, profit, membership size, own brands penetration and its digital business during a blockbuster quarter during which the company also teamed up with DoorDash.

In an earnings call with analysts, BJ's CFO Laura Felice said the retailer's performance "was again led by the grocery business, which had a 6% comp for the third quarter and a 25% two year stack. Despite in stock challenges in certain food, and other household categories, the team delivered a strong performance which demonstrates our continued relevance with our members."

"We saw robust growth across all our digital channels, particularly in BOPIC and curbside pickup, as well as same day delivery," Felice said. "The nature of this growth is important because it is centered on the fulfillment methods where we have advantaged economics. As you know we operate in a warehouse environment with a limited number of SKUs and a higher average ticket, enabling us to be more efficient. BOPIC and curbside sales tend to skew towards bigger baskets and same day delivery sales have the same margins as traditional sales in our clubs."

During the earnings call, CEO Rober Eddy said the company had just signed up to offer delivery through DoorDash. The retailer already does business with Instacart.

"We're thrilled to partner with Tony and his team at DoorDash," Eddy said. "Literally just came to be in the last couple of days. So it's a bit early to fully describe what we're after. But we do think it will complement what we're doing with our partners at Instacart. Our products will be available on both marketplaces, we estimate that DoorDash marketplace will be up in January. And then both partners will also help us execute transactions on bjs.com. And as you might imagine, we're pretty focused on how well we execute those transactions given much more of those transactions come from our members. In fact, 100% of them do."

Eddy said the company is seeing growth "in all divisions, acceleration in traffic and ticket and growth and digitally-enabled of sales and conventional sales, all underpinned by strong membership statistics in both new and tenured members."

"This growth was primarily driven by record renewals," Eddy said. "We continue to believe that we are on track to deliver all time high renewal rates in both first year and tenured members for the year."

In addition, more than 75% of BJ's members are now enrolled in easy renewal.

"As we move people up into higher tier memberships and renew first years at full rates, we see a notable improvement in MFI per member as a result of the mix shift. Our MFI dollar growth has surpassed member growth so far this year, and we expect it to do so for the fourth quarter," Eddy added.

Efforts to expand the footprint also continue to progress at BJ's.

"We expect to open five new clubs this year," Eddy said. "We will enter the Pittsburgh market in December and open in January in Port Charlotte, Fla., Lansing, Mich., and on Long Island. ... And we have 10 more new clubs on tap for 2022."

"Our assumptions are primarily based on our strong momentum and membership results, offset by lower stimulus payments impacting our members," he said.

Westborough, Massachusetts-based BJ's Wholesale Club operates 221 clubs and 148 BJ's Gas locations in 17 states. The company is No. 27 on The PG 100, Progressive Grocer’s 2021 list of the top food and consumables retailers in North America.