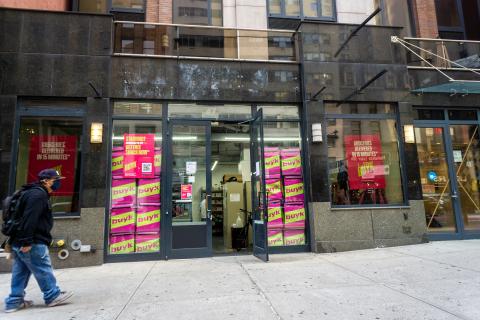 Buyk uses a proprietary technological stack, along with a network of strategically located dark stores, to deliver groceries and other staples to customers’ doors within 15 minutes.

Buyk, a real-time retail service that pledges to deliver groceries in 15 minutes or less, has now expanded into Brooklyn, Queens and the Bronx, following a successful launch in Manhattan in September. The move brings the company’s total number of dark stores in the Big Apple to 20, doubling its previous number of such facilities.

Buyk uses a proprietary technological stack, along with a network of strategically located dark stores, to deliver groceries and other staples to customers’ doors within 15 minutes. The service provides products from well-known international brands and local favorites, both available through the Buyk app.

Buyk has previously revealed its growth plans for 2021 and beyond, first targeting all five boroughs of New York City, and then other major U.S. metropolitan areas.

“We all know how New Yorkers value their time – it is the single most precious commodity in this fast-paced metropolis,” noted Slava Bocharov, co-founder of New York-based Buyk with Rodion Shishkov. “So it is essential that we expand our service to people across the city as quickly as possible, letting all New Yorkers experience the convenience of our 15-minute delivery.

“In just two months, Buyk has seen growth that has taken other players in the sector around a year to achieve,” he continued. “However, this is just the beginning of our journey towards making Buyk the go-to name in grocery. We see huge potential for future growth in the ultrafast sector, as online channels continue to represent just a small share of the total grocery market, and Buyk intends to lead the way in this transition from offline to online.”

Bocharov promised more business achievements to follow “as we continue to entice consumers to this new, revolutionary style of shopping.”

Shishkov and Bocharov also co-founded and ran Samokat, one of Europe’s top ultrafast grocery delivery services. Buyk raised $46 million from CM Ventures, Fort Ross, Citius and other investors in a recent funding round ahead of its September launch.

In other recent instant-needs retail news, Philadelphia-based Gopuff recently debuted its platform for quick deliveries of groceries and restaurant meals in New York City, with plans to expand to London and Paris before the end of the year. Gopuff is also eyeing the San Francisco and Los Angeles markets as future U.S. destinations.