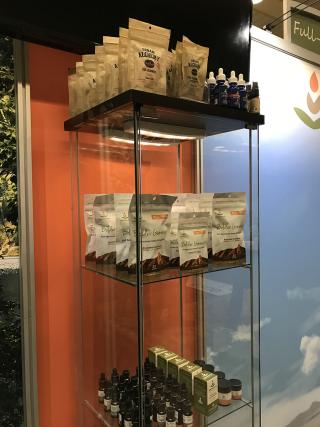 Products from Restorative Botanicals in the Hemp Pavilion at Expo East

Hemp and CBD products were hard to miss at Natural Products Expo East.

To the surprise of few at the Baltimore trade show, which wrapped up on Friday, Sept. 13, or in the wider world, this is a growing area of interest for consumers and retailers alike, identified during the State of Natural & Organic event as a subcategory within the Food as Medicine trend that also includes such movements as keto and Paleo diets.

Since the passage of the 2018 Farm Bill, which legalized hemp as an agricultural commodity, removed it from the controlled-substances list and allowed states to be the primary overseers of hemp production, the plant has become a major player in the health-and-wellness arena, although, as was admitted during the event, consumer confusion abounds as to the efficacy of hemp products.

In keeping with this rising interest, for the first time ever, Expo East included a Hemp Pavilion with 50-plus exhibitors offering the popular ingredient in a variety of products.

Away from the exhibits, meanwhile, retailers attending the show could participate in an all-day Natural Products Hemp & CBD Summit to find out how to source products, educate consumers and prepare for regulators.

Despite the valiant efforts of show organizers, however, and the increasing willingness of retailers in the grocery channel to carry hemp and CBD products in the HBW and functional food aisles, such items still face challenges in the form of a complex regulatory landscape that Peter Matz, director, food and health policy at Arlington, Va.-based Food Marketing Institute, described at an FDA public hearing this past May as “mass confusion in the marketplace for the public, for suppliers and retailers, and also for state regulators and law enforcement.”

The trade group went on to file comments in July urging the federal agency to create a “lawful pathway to market” for CBD products.

In recognition of these difficulties, hemp and CBD suppliers are offering assistance to grocers. Among the companies I encountered in the Hemp Pavilion was Boulder, Colo.-based Restorative Botanicals, whose products include extracted hemp oil blends and hemp oil foods like gummies, caramels and coffee, and is carried by such grocers as Sprouts Farmers Market and Lucky’s. “We’re happy to support you and train you and educate you, not just on our products, but on hemp markets,” noted Jeff Cole, the company’s director of program development, referring to grocery buyers.

On the main show floor, hemp and CBD items were also much in evidence, with one of the more intriguing products on display being Mood33, a hemp-infused sparkling botanical tea line developed by World Finer Foods, a Bloomfield, N.J.-based manager and marketer of premium food, beverage and personal care brands, and New York-based consultancy BeyondBrands, whose founder and CEO, Eric Schnell, also co-founded the Steaz sparkling tea brand back in 2002.

Described by World Finer Foods President and CEO Susan Guerin as “a whole new spin on the hemp category,” each of Mood33’s six sparkling tea SKUs contains 33 milligrams of CBD and offers a different functional formula containing herbs and botanicals that complement the hero ingredient. “Each one is a different function, gives you a different mood state,” explained Schnell. “What we’re trying to do with the brand, obviously, is appeal to the different times of the day, the different moods that our core consumers want to have in their beverage portfolio.” Varieties in the attractively packaged line include Joy, Calm, Passion and Energy.

Invited to sample the various SKUs, I found them tasty, light and effervescent – refreshing while uniquely flavored.

How well will this product do once on retailers’ shelves? That’s anyone’s guess, but its eye-candy appearance and pleasant flavors will certainly help it stand out in a category that’s inexorably making its way into the mainstream.