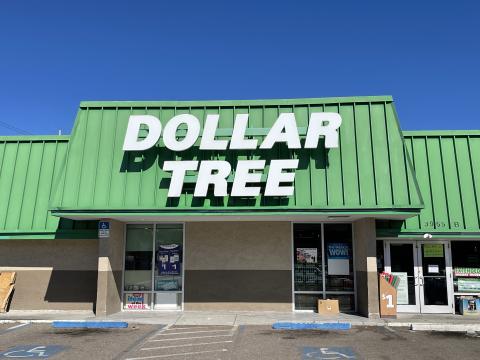 During the quarter, the company opened 174 new stores, expanded or relocated 24 stores, and closed 65 stores.

Consumers seeing more pressure on their rent, utilities and grocery bills headed to Dollar Tree in the fourth quarter.

In an earnings call, Michael Witynski, president and CEO, said the company is looking to "feed that growth" by upping its consumables assortment this year as it navigates supply chain snarls.

"For those products that are considered new or to be reinvested in with the larger quantities or package sizes, we have a clear — a very clear and focused and urgent plan to bring that product into our stores. These assortment changes will be taking place throughout the year, but we do expect 50% of the categories, new and reinvested products, to be in the store by midyear. Example of the products already in the stores are carbonated beverages and salty snacks, all at the $1.25 price point," Witynski said.

Dollar Tree recently completed a successful conversion to a $1.25 price point across all Dollar Tree stores in the United States, more than two months ahead of schedule.

During the quarter, the company opened 174 new stores, expanded or relocated 24 stores, and closed 65 stores. The company also completed 23 Family Dollar store renovations. But it's the footprint of the company's new Combo format that the retailer plans to substantially augment. Dollar Tree ended the year with more than 240 Combo Stores and is planning to add another 400 Combo Stores this year.

Family Dollar's positive 1.7% comp represented the fourth consecutive quarter that the Family Dollar two-year comp stack exceeded 9%. The consumable side of the business comped just below a positive 3%, while the discretionary was a low single-digit negative as it cycled stimulus dollars from the prior year. The Family Dollar business continues to gain share. The strongest-performing categories include pet, candy and snack and beverage. For the quarter, consumables represented just over 73% of sales.

At Family Dollar, November was the strongest comp month of the quarter, closely followed by December. Both periods were above the quarterly comp of 1.7%. January was a negative comp as it cycled a double-digit comp from the prior year related to the release of stimulus dollars. Additionally, retail in January was impacted by the Omicron variant, much colder and stormier weather than the prior year and the lapsing of the monthly child tax credit advanced payments.

The comps at both banners were driven by an increase in average ticket, partially offset by a decline in transaction count.

Gross profit at Dollar Tree was $2.14 billion for the quarter. Gross margin was 30.2%, compared to 31.8% in the prior year’s quarter. The 160 basis point decrease was driven by higher freight costs and recall-related markdowns, partially offset by improved initial mark-on and favorable product mix, reduced shrink and leverage on distribution costs.

Selling, general and administrative expenses were 22.1% of total revenue, compared to 21.7% of total revenue in the prior year's fourth quarter. The increase was primarily due to higher store payroll, card transaction fees, legal fees, and costs associated with the $1.25 price point conversions at all U.S. Dollar Tree stores.

Net income was $454.2 million in the fourth quarter and diluted earnings per share for the quarter was $2.01, compared to $2.13 in the prior year’s quarter. The company incurred three untypical items in its fourth quarter that netted to no effect on quarterly earnings per share. A deferred tax benefit of $61.6 million (or $0.27 per share) was offset by debt extinguishment costs of $46.5 million (or $0.16 per share) related to its refinancing, as well as inventory markdowns and related costs of $34.1 million (or $0.11 per share) in connection with the company’s recent product recall in its Arkansas distribution center and the 404 Family Dollar stores it serves.

"The successful conversion to a $1.25 price point significantly enhances our ability to provide a meaningful assortment at extreme values to our shoppers. We continue to have terrific performance on other key strategic initiatives, including the expansion of our $3 and $5-plus assortments to another 1,500 Dollar Tree stores as well as our Combo Stores and H2 Renovations at Family Dollar," Witynski said.

Chesapeake, Va.-based Dollar Tree, which operates more than 15,700 stores across 48 states and five Canadian provinces, including stores operating under the Family Dollar banner, is No. 30 on The PG 100, Progressive Grocer’s 2021 list of the top food and consumables retailers in North America.