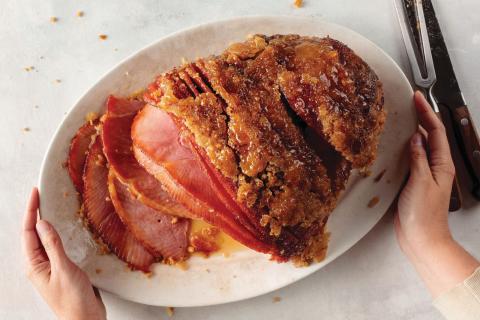 Behind turkey, ham is the next most popular meat served at Thanksgiving, according to a Harris Poll conducted for Omaha Steaks. (Photo: Omaha Steaks)

Cured and smoked pork legs go back at least a couple of millennia, yet innovations in the ham category continue. From whole hams to convenience-oriented cuts to deli meats, processors and grocers are finding new ways to produce and market ham products. The same is true for sausage, another humble foodstuff with both an ancient history and a modern take.

First, ham: Flavor is one driver of innovation, especially as today’s consumers remain on a quest to explore new tastes. While glazes and rubs for cured hams aren’t new, some of the ingredients are a departure from traditional seasonings such as brown sugar, molasses, honey, soy, orange juice and cloves.

If the portfolio of hams from category stalwart Smithfield is any indication, consumers are open to different applications. The Smithfield, Va.-based processor offers spiral sliced smoked ham varieties that include salted caramel and pecan praline, and, for those who crave texture as part of their eating experience, a ham coated in a crunchy glaze.

Flavor delivered through the type of wood used for smoking is also a differentiator in ham. Hickory is the most common, and some brands tout other varieties, like Hormel’s Cure 81 cherrywood-smoked hams.

In addition to heeding consumers’ interest in flavor, grocers can offer more ham options for shoppers, some of whom are seeking convenience, some of whom are experimenting with new recipes, and most of whom are doing a bit of both as they continue to prepare more meals at home during the sluggish return to pre-pandemic normalcy.

Accordingly, many major ham brands offer a range of ham types for various usage occasions, spanning cooked and uncooked ham, boneless and bone-in options, spiral-sliced and unsliced products, and sizes ranging from quarter and half portions to whole hams. Packages of diced and cubed hams are shortcut solutions for an array of recipes, as are ham steaks that can be easily portioned or cooked in a skillet for a smaller meal.

Also part of the ham section of the supermarket meat case are options that fit with shoppers’ healthier lifestyles. Smithfield Foods, for example, revealed this year that it will reduce sodium and sugar and embrace clean labeling across its portfolio by 2025, changes that will impact the brand’s ham offerings.

The approach of the holidays is another reason for grocers to spotlight different types of ham products available in the meat case. Many families may be returning to big celebrations and want whole hams, while others might be having more intimate gatherings and will seek smaller portions and cuts. At the same time, convenience-oriented products like ham slices and pieces provide solutions for home cooks who are making recipes with ham as an ingredient. 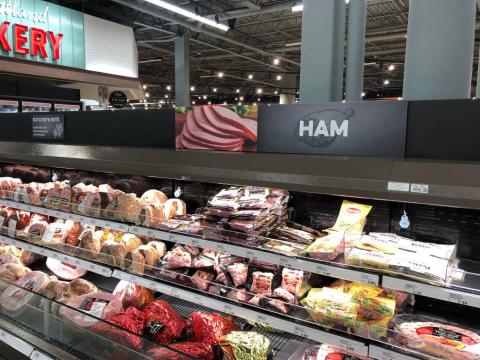 The ham section of the retail meat case has broadened in recent years to include a greater variety of formats, portions and flavors.

Cured hams and ham products from major processors like Smithfield, Hormel, Sugardale and others are commonly found in retail meat departments, but country hams have their place, too.

Burger’s Smokehouse, in California, Mo., which sells its products to such stores as Schnucks, Woodman’s, Price Chopper and Walmart, offers fully cooked and uncooked country hams  rubbed with salt, pepper and brown sugar and aged for more than 90 days. Burger’s also produces an “attic-aged” country ham that takes almost a year to make, according to the dictates of an original family recipe.

As consumers have become more knowledgeable and discerning about where their food comes from, they are also interested in higher-end hams. For instance, the Snake River Farms division of Agri-Beef, in Boise, Idaho, is known for its Wagyu beef, but it also offers Kurobata ham made from purebred Berkshire hogs raised on small family farms. The Omaha Steaks home-delivery menu includes Duroc ham made from a heritage breed of pork known for its tenderness. Amazon offers a grass-fed, bone-in Iberico pork ham cured with Mediterranean sea salt, produced in Spain and available for orders in the United States.

In addition to hams sold in the retail meat case and butcher department, the overall ham category includes deli meats and prepared or packaged foods with ham as an ingredient.

Indeed, ham remains one of the most popular deli meats, with new varieties regularly coming to market. Niman Ranch, based in Westminster, Colo., recently added new sliced deli hams made from pork raised with no antibiotics, while the D’Artagnan brand, based in Union County, N.J., has brought out a line of artisanal deli meats, including an uncured applewood-smoked Berkshire ham.

Meanwhile, with continued demand for products high in protein, meal and snack makers are adding ham to their solutions. Smithfield, for its part, has rolled out heat-and-eat Power Bites made with ham, bacon, sausage, eggs and cheddar.

Interest in high-protein meals and snacks is leading to the development of items like Smithfield's Power Bites, made with ham and other meats.

Links in a Similar Chain

Like ham, the sausage category is mature but continually adding twists on a favorite protein type. From ethnic forms like bratwurst, chorizo and Italian sausage, to sausage bites used on ever-popular charcuterie trays, these loveable links are staples in meat cases and as toppings and ingredients. (Fun fact: October is actually National Sausage Month.)

Sausages flavored with spicy, bold or globally inspired flavors, and made with different base proteins of pork, chicken, turkey and even seafood, have been jazzing up the category for the past several years. Niman Ranch recently got inventive with flavors, introducing an applewood- smoked bacon-flavored breakfast sausage.

New forms of sausage are also helping grocers diversify their protein offerings. For instance, Johnsonville Sausage, of Sheboygan Falls, Wis., just came out with sausage strips, a fully cooked product that looks and cooks like bacon, but is made with pork-based sausage. The strips are available in original, spicy, maple and chorizo varieties (For additional information, go to Best New Products of 2021).

Plant-based alternatives are becoming players in the ham and sausage segments, just as such items have also shaken up other animal-based categories. Grocers can add these items to dedicated plant-based areas of the meat case or merchandise them alongside traditional animal-based counterparts.