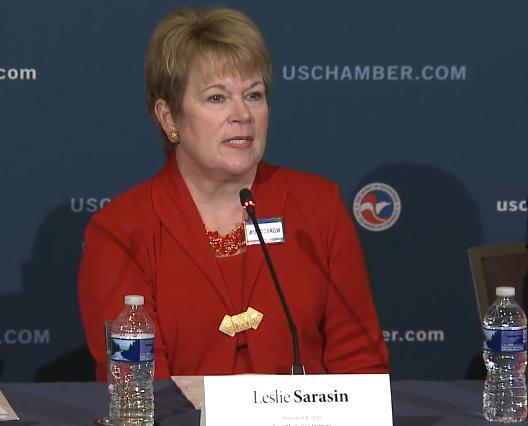 Leslie Sarasin, president and CEO of the Arlington, Va.-based Food Marketing Institute (FMI) has joined with 18 other association leaders representing the retail, agriculture, automotive, and services industries in urging the U.S. Congress to pass the U.S.-Mexico-Canada Agreement (USMCA). In a joint press conference held July 25 by The U.S. Chamber of Commerce, the participants stressed how critical the agreement was to the United States’ economic future, providing certainty to businesses, workers and consumers.

“Thanks in part to our expanded trade with Mexico and Canada, our U.S. produce departments have been transformed over the past 30 years,” noted Sarasin during the press conference. “FMI members are now able to offer safe, high-quality and affordable fruits and vegetables year-round, and not just during the limited U.S. growing seasons. U.S. grocery shoppers can wander the produce section in January and find groceries that allow them to eat like it’s a June day. This transformation has taken place at the same time as new markets have opened and expanded for U.S. growers, so much so that the United States food and agriculture economy now supports more than 45 million jobs and $152 billion in exports every year.”

FMI was also one of the “business and agriculture organizations and chambers of commerce from across the United States” to sign a July 23 letter to Congress requesting members' support for the trade agreement.

The successor to the North American Free Trade Agreement (NAFTA), the USMCA was signed last November at the Group of 20 (G20) economic conference in Buenos Aires, and urged that the measure be approved by Congress next year, but requires ratification by Congress to take effect.