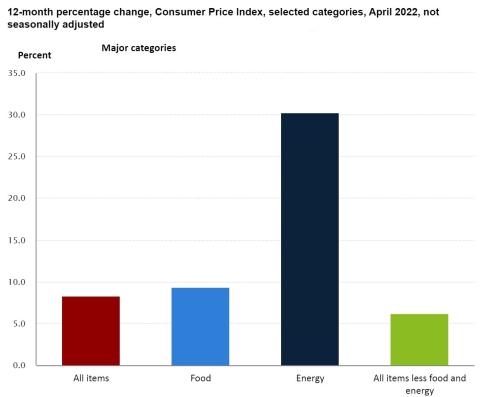 While the overall pace of inflation slowed somewhat in April, food prices are still rising at a notable clip. According to U.S. Bureau of Labor Statistics (BLS) data released on May 11, the Consumer Price Index (CPI) came in 8.3% higher in April compared to the previous April, down a bit from the 8.5% rate in March.

The CPI increased 0.3% during the most recent month, below the 1.2% leap that occurred from February to March. That said, the CPI for food climbed 0.9% on a monthly basis, with food-at-home costs up a full percentage point. Other sectors declined, including energy and gasoline.

The food-at-home CPI is now 10.8% higher than this time in 2021, the biggest year-over-year hike since November 1980. In comparison, prices for food consumed away from home have gone up 7.2% since April of last year.

Dairy and related products edged up 2.5% for a monthly segment gain not seen since mid-2007. The index for nonalcoholic beverages rose 2%, while cereals and bakery products swelled by 1.1%.

There was at least one price dip within food consumed at home. The CPI for fresh fruit declined 0.5% in April, as the index for fresh vegetables remained unchanged.

Some nonfood items commonly sold in grocery stores experienced a bump in price indexes during April as well. For example, the CPI for personal care items increased 0.4%, the same rate as tobacco products.

Heading into a prime season for traveling and entertaining, one economist remained wary about the pricing environment. “The pace of price increases moderated, but not as much as expected. Excluding a decline in energy prices – which appears outdated by this point – the increases remain widespread," Greg McBride, chief financial analyst at Bankrate, commented in a note to media outlets. "With the annual rate ticking down from 8.5% to 8.3, it can be tempting to say we’ve seen the peak, but we’ve also been head-faked before as was the case last August.”