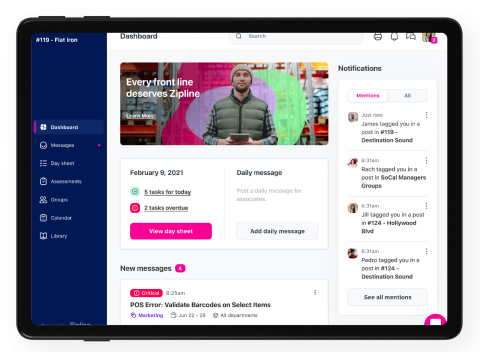 Using Zipline, The Fresh Market can engage its 5,000-plus team members, enabling communications to flow from HQ to stores, creating less friction for store operations and driving better experiences for shoppers.

The Fresh Market Inc. has introduced Zipline’s operations platform across all 159 of its store locations. Through this strategic partnership, the specialty grocer can engage its more than 5,000 team members, enabling communications to flow from HQ to stores, creating less friction for store operations and driving better experiences for shoppers.

At the end of 2020, The Fresh Market’s management team examined their technology and processes and decided that they had a strategic opportunity to better engage their field teams. To that end, the specialty grocer sought a modern solution to streamline communications between store support and the field to standardize how communications, projects and tasks are distributed among locations. After selecting Zipline as its solution for field enablement, The Fresh Market’s field leaders worked closely with the  Zipline team to quickly roll out a pilot. In just a few months, Zipline was deployed across the entire fleet, with immediate success.

“When we met the Zipline team, it was clear that we found a partner that was going to be invested in our success,” said John Bishop, group VP of operations at The Fresh Market. “It was their philosophy around communication and their interest in working with us to expand their specialty grocery solution that continued to grab our attention and ultimately led us to decide to use Zipline.”

After achieving 90% adoption of Zipline at 159 stores, The Fresh Market has dramatically improved its store execution, citing the following:

“Grocery stores are complex with many different departments and complicated hierarchies,” said Melissa Wong, CEO and co-founder of San Francisco-based Zipline. “Working with The Fresh Market has allowed us to enhance our solution while helping them meet their business objectives and align the fleet. It has been a true win-win.”

Another grocer that saw success with Zipline’s solution is West Des Moines, Iowa-based Hy-Vee. As Randy Edeker, Hy-Vee’s chairman of the board, CEO and president, told Progressive Grocer in the March 2021 issue: “Zipline was just a program that we went out to find because we realized we’re not able to speak to our people in a way that we should be able to speak to our people on a daily basis. I also learned right away that video was better than voice, that if they could see me say it, our people liked it a lot better than just hearing me say it. So, in the initial days, I was leaving voice messages that were 10, 15, 20 minutes long each night, telling everybody that we’re going to be OK. And then I evolved to video on my cell phone. ... And then Zipline came along as a way that we could easily get it to everyone instantly.”

As for the effect that Zipline has had on his ability to share information with associates, Edeker asserted: “For the most part, we are such a better company because of how we communicate today.”