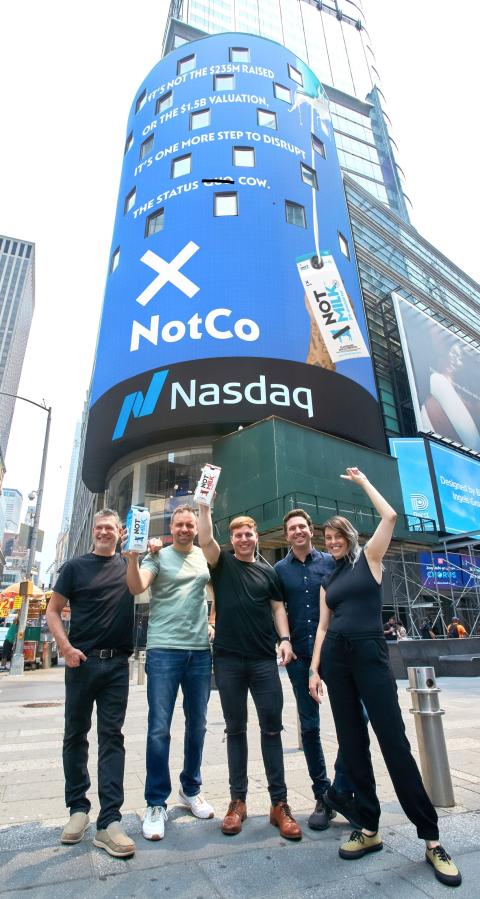 Get ready for a reinvented food industry. Fast-growing NotCo, a Latin American food tech company innovating the plant-based market, has raised $235 million in a Series D funding round, bringing the company’s valuation to $1.5 billion.

NotCo was granted a U.S. patent for its proprietary artificial intelligence (AI) technology, known as Giuseppe, in March, thanks to key venture capital names like Amazon founder Jeff Bezos’ Bezos Expeditions. Giuseppe creates plant-based options that taste, feel, cook and function just like their animal-based counterparts. According to NotCo, the technology’s algorithms allow the company to create true plant-based replacements faster, better and more accurately than anyone else in the industry.

“Our patented AI gives us a significant competitive advantage due to the speed and accuracy with which we’re able to develop and bring new products to market,” said Matias Muchnick, founder and CEO of the Chilean food tech company. “The level of enthusiasm we’ve received from our partners is thrilling and humbling. We all share the same vision for Giuseppe’s ability to catapult plant-based foods into mainstream adoption at a rapid pace by focusing on taste, sustainability and infiltrating multiple categories at once.”

NotCo has raised more than $350 million to date, and the Series D funding will bolster its expansion into new categories in North America, scale the core of its proprietary AI technology, and accelerate plans to launch in Europe and Asia.

"NotCo has created world-class plant-based food products that are rapidly gaining market share," said Scott Shleifer, partner at New York-based Tiger Global. "We are excited to partner with Matias and his team. We expect continued product innovation and expansion into new geographies and food categories will fuel high and sustainable growth for years to come."

The latest funding round comes just one month after a substantial investment from Enlightened Hospitality Investments, in which Shake Shack founder Danny Meyer is a partner; and nine months since an $85 million Series C funding round co-led by Future Positive and L Catterton.

Since its inception five years ago, NotCo has seen explosive growth on the global market, disrupting three main animal-based protein categories simultaneously – dairy, eggs and meat. The company sells NotMilk, NotBurger, NotMeat, NotIceCream and NotMayo in more than 6,000 retailers globally; runs its own direct-to-consumer e-commerce; and holds successful partnerships with Burger King and Papa John’s. NotCo launched NotMilk in the United States seven months ago and is on track to reach 8,000 retail doors by the end of the year. Its products are already available nationally at Whole Foods Market, Sprouts, Wegmans and more.

Austin, Texas-based Whole Foods has more than 500 stores in the United States, Canada and the United Kingdom. The grocer is No. 26 on The PG 100 list, Progressive Grocer’s 2021 list of the top food and consumables retailers in North America. Phoenix-based Sprouts, which employs more than 35,000 team members at 360-plus stores in 23 states, is No. 48 on The PG 100, while Rochester, N.Y.-based Wegmans, which operates 106 stores, is No. 35.