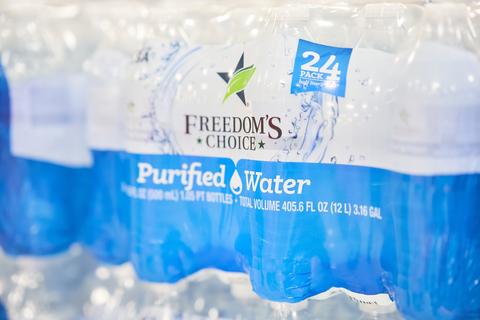 SpartanNash announced that it is sending water and other goods to Ukrainians in need through its military division infrastructure.

As conflict continues to rage overseas, grocery stores in the United States are supporting the Ukrainian people through various charitable efforts.

Michigan-based food solutions company SpartanNash announced that it is providing $1 million in product donations and financial aid to support relief work in Ukraine. The donation includes critical supplies such as canned meats, energy bars, water and personal hygiene. The company is expediting shipments through its military division, which operates distribution centers strategically located near military bases.

SpartanNash will also make an immediate $25,000 cash donation to the relief organization Convoy of Hope. The funds will be used to provide 7,500 additional meals to families in affected areas of Eastern Europe.

“This is a humanitarian disaster, and SpartanNash is uniquely positioned to support Ukrainians in addition to the American military heroes who are serving on the front lines of this crisis,” said Tony Sarsam, SpartanNash president and CEO.

Meanwhile, The Kroger Co. is supplying relief in the form of a monetary donation from its Zero Hunger Zero Waste Foundation. The funds will be sent to a special emergency initiative managed by the United Nations' World Food Program.

Not long after the Russian invasion, Southeastern Grocers, Inc. and its SEG Gives Foundation announced a $250,000 donation to the International Committee of the Red Cross. Southeastern Grocers is also giving all of the proceeds from sales of its store brand Ukrainian vodka to the relief effort.

Grocers of all sizes and scales are pitching in to help as the crisis moves into another difficult week. National Co+op Grocers(NCG), which represents 149 co-op grocery stores in the United States, launched a fundraising drive to support co-op business throughout Ukraine as people there increasingly struggle to feed their families. NCG is teaming up with the Cooperative Development Foundation and NCBA CLUSA on the effort that will assist co-ops, markets, hotels, restaurants and manufacturing businesses throughout Ukraine. The organization also pledged a 100% match for all donations up to $100,000 made by the retail food co-op system.

"The sense of support and solidarity we feel from around the world gives us strength," said Illia Gorokhovskyi, board chair of the Ukrainian Central Union of Consumer Societies (COOP Ukraine), noting that the country's cooperatives are continuing to serve their members. "Despite these circumstances, consumer cooperatives are making efforts to provide the population with the necessities of life, primarily food, and delivering them to where it is most needed."

Efforts are taking place at a grassroots level in American stores as well. Weavers Way Co-op in the Philadelphia area recently began selling traditional Ukrainian dishes like Ukrainian soup and dumplings and giving 100% of the proceeds to the World Central Kitchen’s Chefs for Ukraine program. That program is spearheaded by famed Chef José Andrés, who has been on the ground in an area near Lviv, Ukraine.

In addition to providing monetary assistance and food/hygiene supplies, retailers are signaling their support for Ukrainians by pulling Russian products from their shelves. Several grocers, including Kroger, Publix and Woodman's among others, announced that they will no longer be selling Russian-made vodka.

Grand Rapids, Mich.-based SpartanNash is No. 39 on The PG 100, Progressive Grocer’s 2021 list of the top food and consumables retailers in North America. Cincinnati-based Kroger is No. 3, Jacksonville, Fla.-based Southeastern Grocers  is No. 43 and Lakeland, Fla.-based Publix is No. 11 on The PG 100.