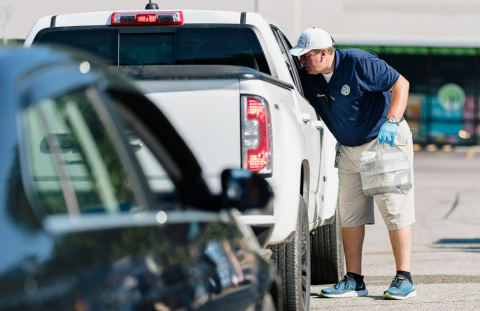 In addition to water, meals and essential supplies, Walmart is offering vaccine clinics throughout flood-ravaged Kentucky.

In the wake of devastating flooding in Kentucky that has left nearly 40 people dead, food retailers including Walmart Inc. and Publix Super Markets are offering support to those impacted. Walmart, Sam’s Club and the Walmart Foundation have committed $750,000 in water, food and funding to relief organizations, while Publix is allowing customers to donate directly to Red Cross relief efforts in the state.

Walmart has sent more than 20 trucks with water and essential supplies to impacted communities, and the company’s Mobile Relief Kitchen has been making meals thanks to participation from Bimbo Bakeries and Tyson Foods. The retailer has made showers available and P&G’s Tide Loads of Hope is offering people the chance to do their laundry. Vaccination events are also being held in the area.

Additionally, Kroger recently donated several truckloads of water and non-perishable food to relief efforts, and also collected donations at its stores in partnership with UPS. The Cincinnati-based grocer activated Red Cross relief donations at all of its Louisville division stores and donated $25,000 to Volunteers of America helping in the area.

Publix, which is still building its first stores in the Bluegrass State, is accepting donations from customers across its footprint that will be given directly to Red Cross relief efforts. Publix Super Markets Charities is also donating $100,000 to the Red Cross.

“We are saddened by the tragic flooding in Kentucky and want to assist those affected,” said Dwaine Stevens, director of community relations for Lakeland, Fla.-based Publix. “Publix and Publix Super Markets Charities are grateful to have the opportunity to help our neighbors in this time of need and thankful for the continued generosity of our associates and customers.”

Each week, approximately 230 million customers and members visit Walmart’s more than 10,500 stores and numerous e-commerce websites under 46 banners in 24 countries. Bentonville, Ark.-based Walmart U.S. is No. 1 on The PG 100, Progressive Grocer’s 2022 list of the top food and consumables retailers in North America, while Sam’s Club ranks eighth. Employee-owned and -operated Publix has close to 1,300 supermarkets in Florida, Georgia, Alabama, South Carolina, Tennessee, North Carolina and Virginia. It is No. 12 on The PG 100.