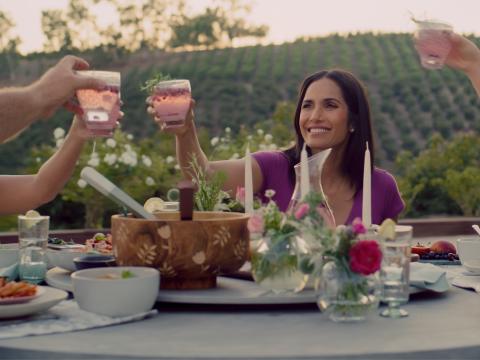 In the "Behind the Box" video, Padma Lakshmi and Imperfect Foods share the stories that inspire the e-grocer’s mission of creating a more sustainable food system, from producer to consumer.

Sustainable e-grocer Imperfect Foods has formed an exclusive partnership with Padma Lakshmi, food expert, television host, producer and author. Imperfect Foods’ first-ever collaboration of this kind includes a video, “Behind the Box,” in which Lakshmi explores the retailer’s process, explaining how it works directly with farmers and producers to reduce food waste by bringing “ugly” and surplus groceries to consumers across the country.

“We are thrilled to join forces with Padma, whose culinary expertise and storytelling skills allow us to shine a light on our broken food system, and the ways in which we are working to repair it and build a better solution,” said Ben Chesler, co-founder of San Francisco-based Imperfect Foods. “Together we will bring to life the stories of our food system and the important values we share — sustainability and accessibility.”

In the video, Lakshmi and Imperfect Foods share the stories that inspire the grocer’s mission of creating a more sustainable food system, from producer to consumer. Imperfect Foods partners with more than 1,200 dedicated small food purveyors, rescuing “imperfect” items. Before and during a cozy dinner consisting of items from her own Imperfect Foods box, Lakshmi engages with guests Stephen Paul, purveyor of Homegrown Organic Farms; Madeline Rotman, Imperfect Foods’ head of sustainability; and Imperfect Foods customer Ash Mac, to shine the spotlight on the supplier and customer relationships that Imperfect Foods has cultivated and the work it’s doing to help the planet. So far, the company has rescued more than 139 million pounds of food.

“Imperfect Foods has a deep understanding of the intersection of food and activism, which is something I’ve always been passionate about,” said Lakshmi. “On the heels of a uniquely challenging year for our farmers, producers and food supply chain, I’m hopeful that our partnership will introduce more people to the compelling stories behind each Imperfect Foods box and create a better understanding of our food system, the people behind it and the future of what it can be.”

The documentary-style campaign, which also features a 75 Questions-style segment with Lakshmi, will continue through Nov. 25.

Founded in 2015 with the aim of eliminating food waste, Imperfect Foods started out by sourcing misshapen and surplus produce that didn’t meet conventional grocery store standards, and delivering it directly to customers’ doors. Since that time, the company has delivered 25 million boxes, expanded into private label and revealed plans to become a net-zero carbon operation by 2030.