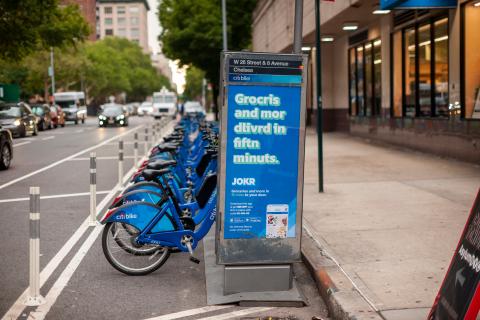 When its decarbonization strategy using Plan A’s software is in place, Jokr plans to fully decarbonize the energy consumption of its hubs by the end of 2023.

To achieve its goal of being the first climate-positive instant grocery delivery platform in the world, Jokr is now working with German greentech company Plan A, which has developed a software for carbon accounting; decarbonization; environmental, social and governance (ESG) management; and automated reporting. Using this solution, Jokr will measure and account for its carbon emissions in line with internationally recognized Greenhouse Gas Protocol standards across all of its emissions sources for the base year 2022. Based on this, the software’s artificial intelligence will then develop a holistic, science-based strategy to decarbonize Jokr’s entire supply chain by 2030.

“Sustainability is a crucial part of our corporate DNA,” noted Ralf Wenzel, CEO of New York-based Jokr, which operates across the United States, Latin America and Europe. “In everything we do, we want to have a positive impact on our environment. That’s why we chose Plan A’s software solution. Unlike many others, this does not immediately resort to compensation measures, but challenges us as a company to critically question all our practices. We trust Plan A’s scientific expertise to identify the right measures and sustainably decarbonize our business operations.”

The strategy will consist of four steps:

According to ReFED, a Long Island City, N.Y.-based nonprofit working to end food waste, retailers generate an estimated 10.5 million tons of surplus food, almost 35% of which goes to landfills or is incinerated as waste. In response to this, Jokr plans to significantly reduce its amount of waste by developing an algorithm that predicts food demand. Additionally, the company will work closely with its suppliers to reduce unnecessary procurement of food that would go to waste. The long-term goal is to reduce not only food waste, but also material waste (cardboard, plastic, etc.) to under 1%. As its first initiative in this area, Jokr sells discontinued food at a reduced price or donates it to charity.

When its decarbonization strategy using Plan A’s software is in place, Jokr plans to fully decarbonize the energy consumption of its hubs by the end of 2023 by sourcing only renewable electricity with proof-of-origin certificates. In regions where that’s not possible, the company will install solar panels. Further, it intends to make fully electrified last-mile deliveries worldwide by the end of 2022, with these deliveries also powered by electricity from renewable energy sources.

Jokr sources as many goods as possible from local suppliers, reducing the environmental impact of long-distance freight while boosting local economies. As a next step, the company is creating a strategy to have suppliers disclose and reduce their greenhouse-gas emissions and other environmental impacts.

“Jokr is not only a highly innovative company that is disrupting the established grocery trade with its last-mile delivery service, but also an authentic pioneer in sustainability,” said Lubomila Jordanova, CEO of Berlin-based Plan A. “We are incredibly proud to be working with Jokr to develop its service into the world’s first climate- positive grocery delivery service, using our science-based decarbonization strategies.”