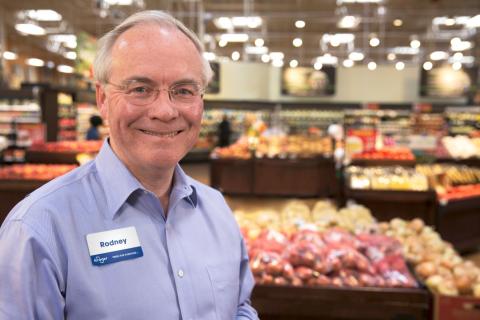 Kroger CEO Rodney McMullen expects consumers to continue eating at home in an effort to save money.

Ahead of the Thanksgiving holiday, Kroger CEO Rodney McMullen chatted with Good Morning America’s Michael Strahan about inflationary prices and consumer trends for the remainder of the year. McMullen shared his belief that we’re starting to see a glimmer of hope as far as decreasing inflationary prices, and also touted the benefits of shopping private label products in order for shoppers to get more for their money.

When it comes to the star of the Thanksgiving table, McMullen said turkeys have gotten more expensive this year, though Kroger is doing its best to keep its customers from feeling the pinch. “If you look at the main part of the meal, our turkey costs are up about 20%, but we decided early on to not pass that cost increase through to help somebody stretch their budget.”

Kroger recently released a zero-compromise Thanksgiving shopping guide with meal options that can feed 10 people for as little as $5 per person. The grocer also expanded its total promotions, digital deals, personalized offers and fuel points savings throughout the holidays.

While other proteins like beef and pork are also still experiencing high inflationary prices, McMullen said prices on chicken and some produce items are starting to come down.

“We are starting to cycle inflation from last year, so it’s starting to slow down a little bit,” McMullen explained. “Our hope and expectation as we get to early next year is that we’ll see it continue to decrease a little bit.”

Although this is the case, the Kroger chief executive expects shoppers to continue reaching for the grocer’s own brand items through next year in an effort to further save money. He also anticipates that consumers will continue cooking and eating at home.

“The biggest thing that we’re seeing is people continue to cook and eat at home,” McMullen said. “One of the things, during COVID, people learned how to cook at home. What they found is they enjoy it. They love eating as a family.”

McMullen also took time to speak with Progressive Grocer Editor-in-Chief Gina Acosta during the Grocery Leaders Executive Forum at Grocery Industry Week in Orlando, Fla., earlier this month. The conversation spanned his early career in the grocery industry, e-commerce, buying a farm, the impending merger with The Albertsons Cos., and much more.

In October, Kroger said it will merge with Albertsons for $34.10 a share, a total enterprise value of approximately $24.6 billion. The merged company would span a national supermarket footprint of nearly 5,000 stores reaching 85 million households in 48 states.

Cincinnati-based Kroger is No. 4 on The PG 100, Progressive Grocer’s 2022 list of the top food and consumables retailers in North America, while Boise, Idaho-based Albertsons is No. 9.