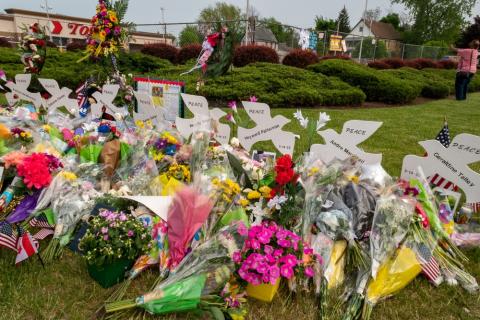 A memorial for the 10 victims killed in a mass shooting at a Tops store in Buffalo, N.Y.

While the mass shooting at Tops Friendly Markets has slipped from the headlines, replaced by news about inflation and gas prices, for people who work in the grocery industry, or even for people who just like going to the grocery store, the events of May 14 in Buffalo, N.Y., aren’t fading away. They’re inflicting deep terror and trauma that won’t be easily forgotten.

After all, we’ve seen it so many times before.

Before 2017, there was just one mass shooting at a grocery store in the United States, according to The Violence Project, a nonpartisan research center, and CNN. That was in 1999, when a man randomly killed four people at a Las Vegas Albertsons store.

While the motivations for these shootings may have been different, the locations depict an undeniable new trend: Mass murderers are increasingly targeting grocery stores.

If we’re to learn any lesson from Buffalo, it’s that this won’t be the last time one of our most beloved American institutions, the neighborhood supermarket, is attacked.

While it would be impossible to predict or stop every grocery store shooting, food retailers should do more to protect customers and employees, both physically and emotionally.

After the Buffalo shooting, Leslie Sarasin, CEO of FMI – The Food Industry Association, wrote in a blog post that the grocery industry “must work together to find new solutions and strategies to help mitigate growing levels of violence in our facilities and empower our employees with the tools they need to respond when necessary.”

FMI has developed resources for this empowerment, such as its “Active Assailant Preparedness and Response Guide,” and formed a partnership with The Power Of Preparedness (TPOP).

“Unfortunately, the likelihood of future tragedies like the one in Buffalo is real and can happen to our stores anytime and anywhere,” Sarasin wrote. “We need new strategies, technology, collaboration and best-practice sharing to help us all find a safe way forward.”

I agree with Sarasin but would add that “a safe way forward” should also include psychological safety, or safety from trauma.

Grocery industry workers have had some incredibly difficult times over the past few years, with the COVID-19 crisis, product shortages, workplace violence, supply chain chaos, protests, and more. The weight of that trauma can’t be overstated, and it’s just one of the reasons the industry is losing so many workers to other fields.

Food retailers will have to find new ways to emotionally support their employees through traumatic experiences. Having an empathetic workplace is no longer a “nice to have” but a “need to have.”

Nobody knows when the next disaster will happen, but grocers can be better prepared to protect employees both physically and psychologically to meet any crisis and come through it stronger as an organization. The time to act is now, before the next catastrophe occurs.