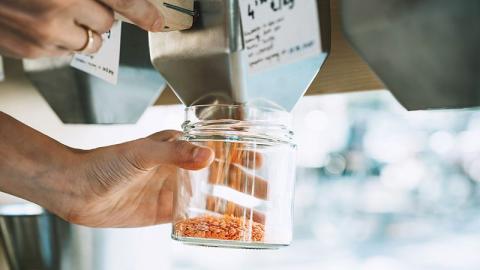 PCC shoppers will soon be able to use their own clean reusable containers for many bulk foods, with some exceptions depending on how the food is dispensed as well as the type of food.

Following what it referred to as “a hard-won change in state regulations and a collaboration with local health departments,” independent cooperative grocer PCC Community Markets will once more permit shoppers to use more of their own reusable containers in stores, a development described as “a big win for less waste,” by Jennifer Beus, PCC’s VP of operations.

Once a common practice at co-ops, coffee shops and other waste-conscious businesses, the use of reusable containers has been restricted in recent years as federal guidelines became more standardized and regulators tried to balance the environmental benefits of reusable containers against potential health risks from cross-contamination.

PCC customers will soon see store signs containing details on how to use more of their own containers. Information will include the following:

These changes will not yet apply to staff-served deli foods such as hot bar and salad bar items, although this could happen as well.

The retailer is reorganizing its bins to make the distinctions clear and maximize the number of foods that qualify for the reusable containers. Reused single-use plastic bags are not considered acceptable under state rules. PCC is also looking into new dispensers that would allow more foods to qualify.

The co-op is getting an early start on those changes under variances recently approved by county health departments for its stores in Washington state’s King and Snohomish counties. However, under recent statewide changes to the retail food code, starting in March 2022, these practices will also be permitted, although not required, for any retail food stores in the state that chooses to develop a plan and can obtain the necessary approvals.

“It’s exciting because we’re lessening our footprint,” observed Bridget Milligan, PCC’s food safety manager, who has been working with state and local authorities on getting reusable containers allowed in stores again.

PCC has been involved since this process began in 2019, urging changes, encouraging revisions to initial recommendations, and collaborating with staff, suppliers and regulators on ways to move forward.

Seattle-based PCC Community Markets operates 15 stores in the Puget Sound area, including the cities of Bellevue, Bothell, Burien, Edmonds, Issaquah, Kirkland, Redmond and Seattle. Besides the Kirkland relocation and new store in Downtown Seattle, the co-op plans to open a new location in Madison Valley.