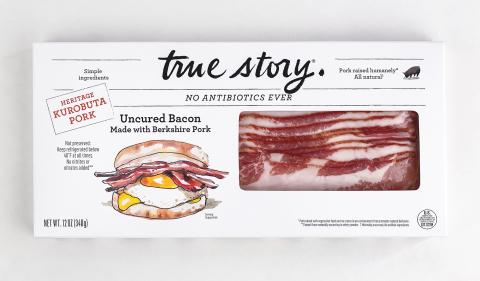 Despite higher prices, premium, natural and organic meats are in demand. They appeal to customers who want quality, gourmet and/or healthy food at almost any cost. Animal welfare and sustainability are also important.

Some purchasers are affluent. Others believe strongly in health-oriented or other food claims and will cut spending in other areas to splurge on pricier meats.

“This is a micro market where shoppers pay a premium,” says Colin Harter, EVP of sales and marketing at San Francisco-based non-GMO meat supplier True Story Foods. “They’ll cut elsewhere before they cut what they eat. You can taste the difference.”

COVID-19 has driven more people to make healthier food choices, notes Tim Kent, director of meat and seafood at Grand Rapids, Mich.-based SpartanNash. “Our shoppers will pay a bit more to add these qualities to their cart.”

Customers often associate claims like “all-natural,” “no hormones” and “no antibiotics” with taste and quality, according to Jim Rogers, SVP of sales at Arkansas City, Kan.-based Creekstone Farms, which markets premium Black Angus beef. “Many home cooks want to experiment,” he points out. “They’re confident and want to re-create restaurant meals. Retailers can capture the curious meat consumer.”

True Story Foods makes these claims with Berkshire Kurobuta organic pork. Its humanely raised pigs’ “Old World” genetics help produce meat that is redder, sweeter and fat-laced, making it more tender and juicier. “These characteristics were taken out of hogs in the 1980s to make pork the ‘other white meat,’” explains Harter.

Popular offerings from the company include pulled pork, bacon and carver-style chicken breasts, which work well in salads and wraps. Harter hopes to add seasoned and deli sliced versions to the lineup.

Also making in-roads is European veal. The key ingredient in ossobuco and saltimbocca, the protein is known for its light color and delicate taste and texture. In the United States, the Dutch Meat Industry Association is promoting Trusted Veal from Europe. Veal hails from Holland, the European Union’s largest veal producer.