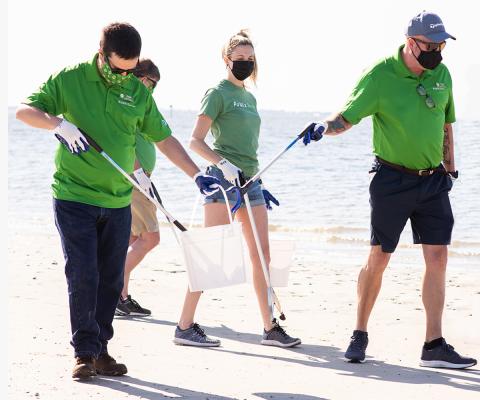 During Publix Serves Week, associates work with nonprofit organizations to help clean up waterways and trails, and remove invasive plants.

As part of Publix Serves Week, more than 6,200 Publix Super Market associates across the company’s seven-state operating area are volunteering this week at more than 220 state parks and other nonprofit organizations focused on environmental sustainability.

“Our spring Publix Serves initiative focuses on extending our commitment to preserve and protect the environment by volunteering with nonprofit organizations,” said Publix CEO Todd Jones. “Through the support of our associates, we continue to build on Publix’s decades-long commitment to care for our natural resources, while doing good together.”

During the week, associates are working with organizations like Keep America Beautiful affiliates, Brevard Zoo, Jacksonville Arboretum & Botanical Gardens, and state parks to clean up waterways and trails, remove invasive plants and complete repairs, among other projects.

As part of the company’s commitment to environmental sustainability, Publix has embarked upon long-term collaborations to support freshwater restoration in its home state of Florida.

Last year, the grocer pledged $2 million to save the Florida Everglades. Publix recently completed the first phase of the restoration initiative in the Corkscrew Swamp Sanctuary. To date, 200 acres of invasive willows and other plants have been removed from the sanctuary in an effort to restore the natural landscape. According to a third-party evaluation, the phase-one removal will allow more than 44 million gallons of water per year to be returned to the wetland’s ecosystem, the equivalent of nearly 67 Olympic-size swimming pools.

In addition, for the sixth year in a row, Publix has supported the restoration of damaged Florida watersheds through its annual donation to the Arbor Day Foundation. This year’s donation, funded primarily with proceeds from the sale of Publix-branded reusable bags, will allow for the planting of 126,000 longleaf pine saplings near Econfina Creek and Chipola River, areas nearly stripped of trees by Hurricane Michael in 2018. Planting began Jan. 4, and concluded Feb. 28.

Since 2016, 731,000 trees have been planted in four damaged Florida watersheds due to the company’s donations. According to the Arbor Day Foundation, over the next 50 years, these trees are estimated to reduce rainwater runoff by intercepting more than 66 billion gallons of rainfall. When runoff is reduced, more water soaks into the ground and, ultimately, into the aquifers supplying Florida residents with clean drinking water. The trees are also estimated to absorb more than 467,000 metric tons of net carbon dioxide during the same period.

Employee-owned and -operated, Lakeland, Fla.-based Publix has more than 1,200 stores in Florida, Georgia, Alabama, Tennessee, South Carolina, North Carolina and Virginia. The grocer is No. 11 on The PG 100, Progressive Grocer’s 2021 list of the top food and consumables retailers in North America.