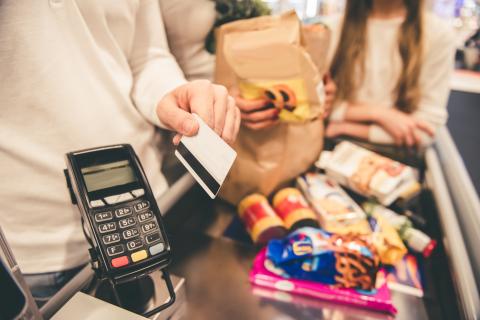 U.S. merchants, including grocers, pay the highest swipe fees in the industrialized world, according to retail trade organizations.

The Merchants Payments Coalition, which represents retailers, supermarkets, convenience stores, gasoline stations, online merchants and others, has urged Congress to bring competition to the U.S. credit card market, contending that Visa and Mastercard’s domination of the market has stifled innovation and caused rising swipe fees that are particularly burdensome for small businesses, drive up prices for consumers and contribute to inflation.

“We hope this hearing will be a landmark step toward bringing about the transparency and competition that is missing from our nation’s broken payments system,” said Merchants Payments Coalition Executive Committee Member and National Association of Convenience Stores (NACS) General Counsel Doug Kantor. “In all other segments of the economy, businesses compete to offer the best deal to their customers, and those that do are rewarded. That is not true with credit cards. Instead, two global giants wield their immense market power to price-fix fees, shut out competition and set rules that make it impossible for anyone else to win. It’s time for Congress to tear down barriers to competition and ensure that we have a credit card market that works.”

Kantor testified on behalf of NACS and Merchants Payments Coalition at a Senate Judiciary Committee hearing, “Excessive Swipe Fees and Barriers to Competition in the Credit and Debit Card Systems.” Committee Chairman Richard J. Durbin, D-Ill., called the hearing after Visa and Mastercard last month refused to stop a $1.2 billion increase in swipe fees even though Durban, Sen. Roger Marshall, R-Kan., Rep. Peter Welch, D-Vt., and Rep. Beth Van Duyne, R-Texas, requested that the hike be withdrawn. According to a letter that the legislators sent to the CEOs of Visa and Mastercard in April, the increase would intensify inflationary pressure.

In his testimony, Kantor noted a range of what he deemed anticompetitive practices by Visa and Mastercard, including the companies’ longtime practice of centrally setting the complex matrix of swipe fees charged by the thousands of banks across the country that issue their cards, which, according to many legal experts, violates federal antitrust law. For their part, the banks all charge the same fees rather than competing over the amount charged to merchants. Kantor also discussed how fees and terms set by the networks give rise to further challenges such as reducing incentives for innovation in new payment products and improvements in services like fraud protection. Together, Visa and Mastercard control 80% of the U.S. credit card market.

“The problems caused by all of this for consumers, merchants and the economy are immense,” observed Kantor. “The United States should have the most efficient, effective and innovative payment system in the world, but we don’t. Instead, we pay the highest swipe fees in the industrialized world. This market desperately needs changes so that competitive market forces can improve payments for everyone.”

According to Kantor, U.S. merchants paid $137.8 billion in credit and debit card processing fees in 2021, which he described as a “huge jump” from the $110.3 billion paid the year before. The fees have more than doubled since 2010, and more than tripled in the decade before that.

Regarding independent grocers specifically, the National Grocers Association (NGA) submitted a statement for the record to the Senate Judiciary Committee in advance of the committee’s Wednesday morning hearing.

“For more than a decade, Visa and Mastercard have set not only their network fees – the costs associated with a credit or debit card payment being routed through their network, but the interchange fees that merchants pay to the issuers of the credit and debit cards that Americans transact with. Nearly twice a year, every year, these two card networks have instituted fee changes which, on net, almost always lead to increases in merchants’ costs,” NGA asserted in the statement. “This hearing comes on the heels of a net $1.2 billion increase in interchange fees implemented by Visa and Mastercard in April 2022.”

“U.S. merchants pay the highest swipe fees in the industrialized world, but they have no ability to affect these costs,” said Greg Ferrara, president and CEO of Washington, D.C.-based NGA. “These anticompetitive fees imposed on independent grocers drive up the costs of food and other goods at a time when Americans are already reeling from a level of inflation not seen in a generation.”

“The two global networks centrally set the pricing and structure of swipe fees,” added Robert Yeakel, NGA VP of government relations. “In any other market, be it grocery or elsewhere, if prices were centrally set by two companies for the rest of the industry’s participants, there would be significant antitrust concerns. In the credit card space, however, this has been industry practice for more than a decade.”

Additionally, the National Retail Federation and a group of small retailers affirmed to Congress that small businesses are the hardest hit by high credit card swipe fees.

“Ongoing and unwarranted increases in swipe fees are especially damaging to small retailers,” noted Stephanie Martz,  chief administrative officer and general counsel of Washington, D.C.-based National Retail Federation, in a letter to the Senate Judiciary Committee. “We have heard many stories from small retailers about the extreme challenges posed by the current payments system and Visa and Mastercard’s continuing monopoly. It is small retailers who are calling for swipe fee reform more than any other segment of our industry. They pay the highest swipe fees and have the fewest resources to fight back against global credit card networks and Wall Street banks. They want the card industry to compete the same as they do.”

No matter what size the retailer is, swipe fees are most merchants’ highest operating cost after labor and drive up consumer prices, amounting to more than $700 annually for the average U.S. family, the NRF contended, noting that as a percentage of the transaction, they rise as prices rise, creating a multiplier effect for already soaring inflation.

In contrast, Bill Sheedy, senior advisor to the chairman and CEO at San Francisco-based Visa Inc., contended in his testimony at the hearing that grocery stores and supermarkets, restaurants, and the travel, small-ticket, education, rent, telecom, health care and insurance segments have all have had their interchange rates reduced; that more than 90% of small businesses are now being charged lower interchange rates, not higher; that there is inherent value to both consumers and merchants in fraud protection, guaranteed payment, loss prevention, market access, and more; and that the highly competitive landscape is an indication of a healthy market, not a broken one.