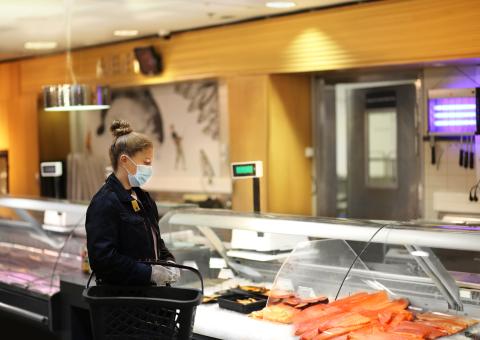 According to FMI's "Power of Seafood 2021" report, the main reason for higher seafood consumption is consumers want to eat more healthfully.

FMI — The Food Industry Association has released its “Power of Seafood 2021” report, which found that the seafood department was a major driver of higher grocery sales last year, having seen a 28.4% sales uptick, surpassing the sales growth of the produce, meat or deli departments. In total, fresh, frozen and shelf-stable seafood generated more than $16.6 billion in sales for food retailers in 2020. According to the report, the main reason for higher seafood consumption is that consumers are trying to eat more healthfully (59%).

“The analysis suggests an urgency for food retailers to expand their seafood programs to help sustain consumer awareness of this protein that has emerged in popularity as a result of the pandemic,” said Rick Stein, VP of fresh foods for Arlington, Virginia-based FMI. “The call to action among grocers is to focus on seafood nutrition, cooking guidance, meal ideas and sustainability both in-store and online as ways to maintain shopper interest in seafood.”

The study found that 72% of frequent seafood consumers are making more of an effort to choose healthy and nutritious choices since the pandemic. Simultaneously, 74% of seafood consumers and 43% of non-seafood consumers want to become more knowledgeable about the nutritional benefits of seafood, which is a major source of healthful omega-3 fats, rich in nutrients such as vitamin D and selenium, high in protein and low in saturated fat.

More consumers (36%) in general, and particularly more seafood consumers (53%), said that they were cooking more meals with seafood during the pandemic. At the same time, most seafood consumers (75%) wish to be more knowledgeable about how to cook, prepare and flavor seafood. Twenty percent of survey respondents said that they relied on food retailers’ seafood departments for guidance, while others (18%) depended on grocery store websites or apps. The report noted, however, that there was room for grocers to expand such efforts.

According to the “Power of Seafood 2021,” four in 10 seafood consumers (41%), up from 29% in 2019, said that sustainable seafood certifications have a major impact on their seafood purchases. In fact, 71% said they wanted to know more about seafood sustainability.

As well as these focus areas, the report described a new emerging seafood consumer, as featured in FMI’s How The Seafood Shopper Has Changed video.

The report was conducted by FMI and made possible by Netherlands-based Veramaris, which produces omega-3 fatty acids for animal nutrition from microalgae.