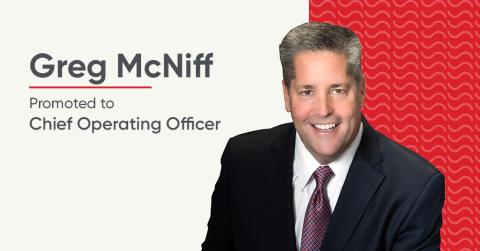 Southern California grocer Stater Bros. Markets has promoted President Greg McNiff to the position of COO, effective immediately. In this position, he will lead the company’s marketing, retail and distribution departments and report to CEO Pete Van Helden. In addition to his new role as COO, McNiff will remain as the company’s president and continue to serve on its executive leadership team.

Reporting to McNiff will be SVP and Chief Marketing Officer Rebecca Calvin, SVP Retail Operations Bertha Luna and SVP Distribution Darold Fero. The new structure will result in the strategic and philosophical unification of three core operational business units under a single point of leadership to help achieve the company’s long-term strategic plans.

McNiff is a 41-year veteran of the supermarket industry who has spent 30 years of his grocery career in Southern California. His grocery career began in 1981 as a courtesy clerk at Albertsons and grew into a variety of leadership roles for the company. Responsibilities included serving as VP of operations, VP of integration, VP of marketing, VP of fresh merchandising, SVP of operations and SVP of marketing/merchandising. In 2016, McNiff advanced to division president of Albertson’s Portland Division.

He has served as the Stater Bros. president since arriving at the company in 2019 to fill the role from longtime President George Frahm, who retired after 47 years with the grocer.

McNiff holds a bachelor’s degree in business management from California Coast University and is a graduate of the USC Food Industry Executive Program. He is a past president of the Western Association of Food Chains and currently serves on its executive board. In addition, McNiff was the 2019 recipient of The Illuminators Torch Award.

“Greg is known for being a compassionate leader and I admire his thoughtfulness and how much he cares for people. He brings teams together and encourages them to achieve alignment behind our company’s initiatives,” said Van Helden. “I look forward to working with Greg to harness the strengths and resources of our teammates into a powerful, unified force.”

San Bernardino, Calif.-based Stater Bros. operates more than 170 supermarkets in seven Southern California counties and employs about 18,000 associates. The company is No. 59 on The PG 100, Progressive Grocer’s 2022 list of the top food and consumables retailers in North America.