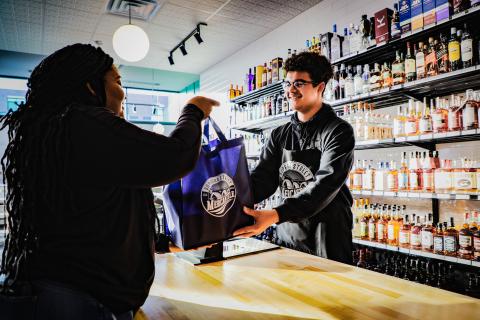 Along with basics like milk, eggs and pasta, Superior Street Mercantile shoppers can choose from a broad selection of locally sourced artisanal products.

The first independent grocer in the manufacturing town of Albion, Mich., in more than three decades, Superior Street Mercantile is a 2,500-square-foot store featuring more than 120 Michigan-based brands, including a dozen from the greater Albion community. The store is located at 217 South Superior Street and open from 10 a.m. to 8 p.m., seven days a week

Along with basics like milk, eggs and pasta, shoppers can choose from a broad selection of locally sourced artisanal products such as grass-fed beef, craft beer, coffee from Ann Arbor, baked goods, prepared salads and fresh produce.

“We want families to know they can come in and pick up something quick for lunch or dinner,” noted Caroline Hurteau, project manager of the mercantile, which is owned in part by her family. “We don’t anticipate locals will get everything for their weekly grocery list here, but we know we’ll fill a void with unique specialty items not available within 25 miles of Albion.”

Taking up two storefronts of a building that dates back to 1884, Superior Street Mercantile fills the largest void in downtown Albion, whose decades of economic decline forced businesses to move away or close. The grocer is also the latest part of the “Big Albion Plan” to come to life. Led by the Albion Reinvestment Corp. (ARC), the plan maps out the revitalization of residential and commercial properties in the downtown commercial district. Superior Street Mercantile employs eight associates, all of whom live within the city limits.

In recent years, the revitalization has attracted such new businesses as the Albion Malleable Brewing Co., Foundry Bakehouse, a Courtyard by Marriott hotel and dozens of newly developed apartments and lofts.

Founded in 2021, Superior Street Mercantile is owned and operated by the Dobbins family, longtime Albion residents who have played a key role in the community's revitalization. ACE Investment Properties, in partnership with ARC, shepherded the construction of the store.