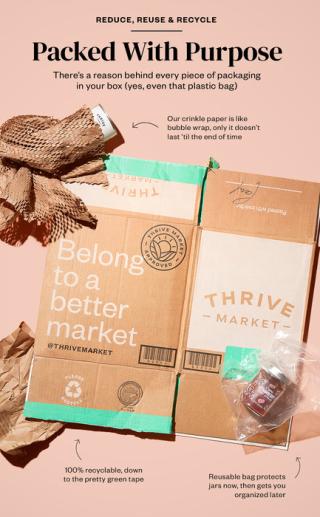 Thrive Market has unveiled its B-Corp certification, making it the biggest online grocer,first major national grocer and largest non-GMO food retailer in the United States to receive this designation.

According to Thrive, it earned its B-Corp certification largely because of its Zero Waste fulfillment centers effort, new curated packaging, and commitment to organic and regenerative organic agriculture.Further, the company’s supply chain poverty alleviation efforts, which include trade terms, positive labor conditions and support for underserved suppliers to reduce poverty, also played a role.

“Thrive Market is trying to build a company and an infrastructure that could last 100 years,” noted co-founder and CEO Nick Green. “Being a B-Corp enables mission-driven companies like ours to stay mission-driven through capital raises, changes in ownership or leadership by cementing the values and pillars we put in place.”

The designation lets customers, employees and the industry know that Thrive Market has met the highest independent standards for social and environmental performance, public transparency, and legal accountability.

“Ingraining values into an essential business is imperative to a sustainable future,” said Lindsey Wilson, business development manager at B Lab, a nonprofit organization that provides B-Corp certification. “Thrive Market’s commitment to be the leader in the grocer community, especially as online grocers like Thrive Market have become increasingly important and valuable amid the pandemic, serve as captains and catalysts of social change. Thrive Market is the model for all grocers and is among the most environmentally responsible grocers in the United States.”

Berwyn, Pennsylvania-based B Lab certifies companies based on how they create value for their employees, community and the environment, and their non-shareholding stakeholders.

The first grocer ever to achieve B-Corp certification was Portland, Oregon-based New Seasons Market, back in 2013.

Los Angeles-based Thrive Marketis an online membership-based marketplace that carries more 5,000 organic and non-GMO products, and offers 70-plus filters and values, allowing consumers to shop by diet and lifestyle.