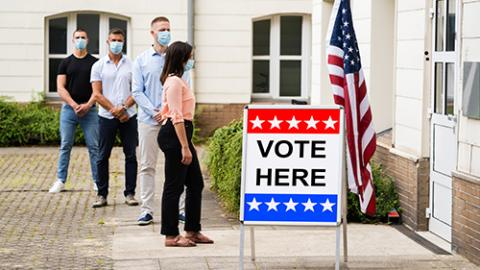 There’s an important election coming up, and the outcome could have lasting consequences for the nation.

Not that election. The presidential election is hugely important for all sorts of reasons, but for the retail industry, there’s a different issue on the ballot in California that could impact the fastest-growing part of the food retailing world. Here’s a condensed version of what’s going on, and why the future of grocery e-commerce could look different after Nov. 3.

Voters in California are being asked to vote “yes” on a proposition that seeks to undo a law enacted last year that imposed what were seen at the time as worker-friendly restrictions on big corporations. That’s generally the type of thing that lawmakers in California do, except in this case, it backfired, especially in the eyes of new economy technology companies that operate platforms and are dependent on being able to classify workers as independent contractors.

The situation of how grocery e-commerce came to be affected by the decision of voters in California this November arose in 2018. That’s when the California Supreme Court ruled in a worker classification case that most workers should be considered employees, and placed the burden on employers to prove otherwise. Legislators then passed, and Gov. Gavin Newsom signed, Assembly Bill (AB) 5 last year, which expanded the ruling and imposed new requirements for determining when a worker is an independent contractor versus an employee.

The effect of AB 5 was to define workers at gig economy companies, those providing rides and delivering all sorts of products, including groceries and food from restaurants, as employees, as opposed to independent contractors. The distinction is huge, because a key element of the business models of crowd-sourced companies is their ability to avoid the full-loaded expense of workers who are considered employees at other types of companies.

AB 5 was, and is, a huge issue for gig economy stalwarts such as Uber, Lyft, Instacart, DoorDash and Postmates. The five companies banded together and secured the signatures needed to place Proposition 22 on the ballot and make a direct appeal to California voters. What Prop 22 does, according to language on the ballot, is “[exempt] app-based transportation and delivery companies from providing employee benefits to certain drivers.”

The outcome of the election on the gig economy business model is so significant that the five companies previously mentioned have spent close to $200 million, a national record for a ballot measure, on educating California voters about the benefits of voting “yes” and the dire consequences that a “no” vote would have on an already beleaguered state. In a sense, the Prop 22 campaign has all of the posturing, unsubstantiated claims and information distortion that come with any hotly contested political campaign. However, the Prop 22 debate is blended with the added complexity of worker classification issues and labor laws that are hard enough for human resources professionals to understand.

Proponents contend that the issue is about saving jobs, preserving worker flexibility, and even protecting vulnerable communities by warning of service cuts if the measure fails. They have a slick website with an intuitive user experience befitting the capabilities of leading technology companies. Opponents of Prop 22, who are actually proponents of AB 5, argue that it’s about worker protection and treating businesses equally, because treating workers as employees requires employers to make contributions to Medicare, Social Security and unemployment insurance programs.

Whether Prop 22 passes or fails, there will be implications for retailers of food and consumables. Passage would bring some short-term clarity to the issue, but it doesn’t mean those advocating for independent contractors will let go of the issue. They could simply shift tactics and focus instead on the retailers that use the services of platform companies to drive the fastest-growing part of their business. We’ll have a better idea of the path forward on the morning of Nov. 4.