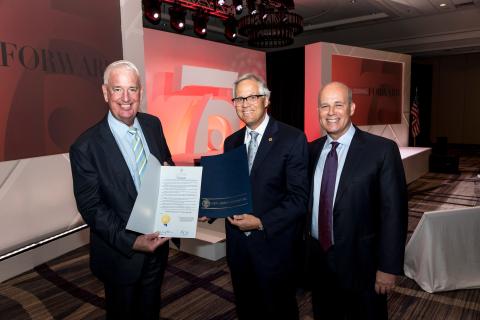 “As we reflect upon the rich legacy of our cooperative – and the history of our family businesses – we also focus on the future, mindful that we are here today because working together, our founding families had the foresight, determination and grit to always look forward,” said Colalillo, who also runs ShopRite of Hunterdon County, which was founded by his father in 1954 and today consists of five ShopRite stores. “Seventy-five years later, we are still made up of family-owned businesses with deep roots in the communities where our stores operate.”

As part of the meeting, Wakefern reported retail sales of $17.8 billion for the fiscal year ending Oct. 2, a 2.7% decline from the prior year’s $18.3 billion.

“The prior year was up nearly 10%, but benefited from pandemic spending and a 53-week fiscal year,” noted Mike Troy, editorial director of Progressive Grocer. “Given that challenging comparison, a 2.7% decline seems like a win.”

“Seventy-five years is a big deal – pretty remarkable given that family-owned businesses rarely survive past the third generation,” noted Sheridan. “It’s important that we pause and recognize this milestone and use it as a moment to reflect on what made us great in the past and what will keep us great to ensure that we keep moving forward for generations to come.”

Meanwhile, Lane discussed the retail innovations adopted by the co-op, including the expansion of Wakefern’s successful private brands, Bowl & Basket, Paperbird, and Wholesome Pantry and Wholesome Pantry Organic, as well as the growth of the Fresh to Table meal solution concept in ShopRite stores.

Further, Colalillo presented this year’s Chairman’s Award to Dewey Cannella, Wakefern’s recently retired VP of labor relations, thanking the executive for his 30-plus years of service to the cooperative.

Wakefern was founded in 1946, when eight independent New Jersey grocers, faced with mounting pressure from big supermarket chains, united to maximize their purchasing power by forming a buying cooperative.