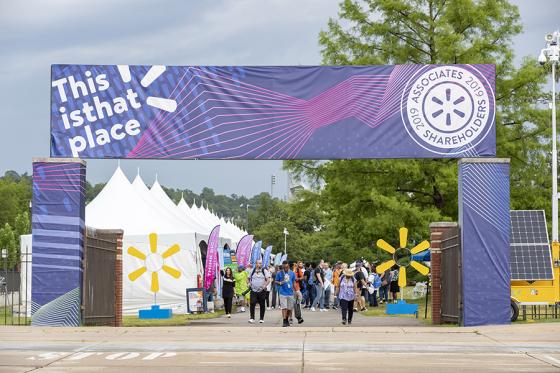 Sen. Bernie Sanders, who is running for president, was a high-profile attendee of Walmart's 2019 shareholders meeting

Despite the presence of presidential candidate Sen. Bernie Sanders, I-Vt., to speak in favor of making hourly associates eligible to sit on Walmart Inc.'s board of directors, the proposal failed to pass at the mega-retailer’s annual shareholders meeting, which took place this week in Rogers, Ark. Proposals on strengthening the prevention of sexual harassment and to adopt a cumulative voting standard in the election of directors also failed to pass.

The shareholders did approve the election of each of Walmart’s 12 director nominees; vote to approve, on a nonbinding, advisory basis, the compensation of Walmart’s named executive officers described in its 2019 proxy statement; and ratify the appointment of Ernst & Young LLP as the company’s independent accountants.

Meanwhile, regarding Walmart workers’ wages, at the meeting, President and CEO Doug McMillon called for Congress to up the federal minimum wage of $7.25 an hour, which the executive pointed out is “lagging behind” the retailer’s $11-an-hour wage, The Washington Post reported, also noting that McMillon believes that such increases should be introduced gradually and take into account cost-of-living differences.

In response, Sanders, a longtime critic of Walmart's salary practices, retorted that the company pays associates “starvation” wages and should match the $15 an hour that Costco and Amazon workers receive, according to the newspaper. The senator was invited to the meeting by Walmart associates to introduce the failed proposal to allow hourly workers a seat on the board.

New Ways to Give, and New Vests

In other Walmart news, the company has introduced the Walmart Rise initiative to create “new and different ways to engage Walmart associates and customers in supporting their communities." To jump-start the initiative, Walmart will give an additional $5,000 to every one of its U.S. store and distribution centers this year, totaling more than $24 million, “to help spark change in their local communities.” The community funds will raise the company’s expected local community grant giving to almost $70 million this fiscal year.

Additionally, on the heels of its 2018 dress code change allowing store associates to wear such items as jeans and sneakers to work, Walmart is rolling out updated vests with “a modernized style that takes advantage of trim detail and screen printing to introduce color in an eye-catching way.” Made from recycled bottles, the new vests, most of which are a neutral steel gray, will feature vibrant trim (blue for Supercenters, green for Neighborhood Markets) and a bright spark logo on the back, as well as spark screen printing on the side, and larger pockets. Later this year, more options will be available for associates to personalize their looks, which Walmart said will be available for purchase online at no more than $11 each.

Bentonville, Ark.-based Walmart operates more than 11,300 stores under 58 banners in 27 countries, and ecommerce websites. The company is No. 1 on Progressive Grocer’s 2019 Super 50 list of the top grocers in the United States.