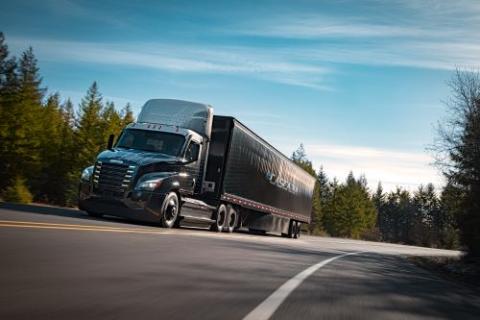 Walmart will run a battery-electric day cab proof of concept with Freightliner’s eCascadia and Nikola’s Tre BEV in Fontana, Calif., later this summer.

Since setting a goal to achieve zero emissions across its global operations by 2040, Walmart has made big strides with its last-mile delivery fleet to include electric delivery vans, drones and self-driving electric cars and class three trucks. The retailer is also committed to transforming its class 8 trucks through a series of pilots and collaborations.

Walmart’s current transportation fleet covers 12,000 drivers, 10,000 tractors and 80,000 trailers traveling more than 1 billion miles each year – making up about 24% of its Scope 1 emissions in 2020. In order to make meaningful changes to its environmental impact, the company is evaluating various attributes of renewable natural gas, hydrogen and electric fuel for its over-the-road trucks, refrigerated trailers and yard trucks.

As such, Walmart will deploy and evaluate vehicles powered by compressed natural gas (CNG), and will also be the first transportation company to add the Cummins 15-liter Natural Gas Engine to some of its trucks. That engine will aid in the lowering of emissions while offering lower overall costs per mile than diesel engines. Walmart has also made a deal with Chevron to supply its trucks with CNG linked to renewable natural gas.

“With so many major players in the industry working together to find a solution, we are optimistic we can drive meaningful growth in the market with critical lessons to come from this pilot,” wrote Fernando Cortes, Walmart’s SVP of transportation, in a company blog post.

As for hydrogen, Walmart is already using it to power many forklifts in its distribution centers and has plans to test Texas-based Capacity’s first second-generation hydrogen fuel cell yard truck. The truck can operate up to 10 hours on a single refuel, has faster refuel time and less dependence on the electric charging grid.

With electric vehicles becoming more mainstream, Walmart plans to utilize them for yard operations, lighter weight hauls and day deliveries of around 200 miles. This summer, the company will run a battery-electric day cab proof of concept with Freightliner’s eCascadia and Nikola’s Tre BEV in Fontana, Calif. The electric day cabs will pick up loads from suppliers and deliver them to a consolidation center in the area.

“Becoming a zero emissions company won’t be as simple as adopting electric alternatives,” Cortes wrote. “For some vehicle classes, the solution might look like a hydrogen-fueled yard truck moving an electric refrigerated trailer, which eventually gets transported by a natural gas-powered truck. Our hope is that by testing and learning, we can find the right recipe to reduce greenhouse gas emissions and create a less impactful transportation fleet, all while still delivering the freshest food and goods to our customers.”

Each week, approximately 230 million customers and members visit Walmart’s more than 10,500 stores and numerous e-commerce websites under 46 banners in 24 countries. The company employs approximately 2.3 million associates worldwide. Bentonville, Ark.-based Walmart U.S. is No. 1 on The PG 100, Progressive Grocer’s 2022 list of the top food and consumables retailers in North America.