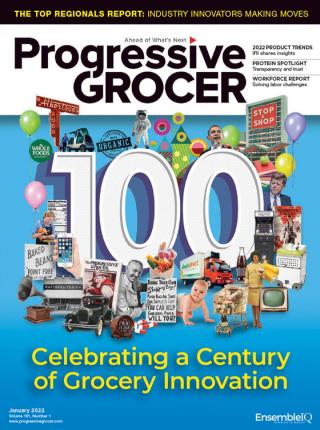 In early November, top leaders from every corner of the grocery industry gathered in Orlando, Fla., to attend Progressive Grocer’s inaugural Grocery Industry Week. It was a pivotal event during a pivotal year in which PG celebrated its 100th birthday, I became editor-in-chief of this wonderful brand, and the grocery industry recalibrated many aspects of its operations, including returning to in-person events after nearly three years of a catastrophic pandemic.

More than 600 attendees traveled to the Hyatt Grand Cypress Resort near Walt Disney World to attend the sold-out summit, which consisted of GenNext: The Future Leaders Forum (a celebration of the most promising emerging talent in grocery); the Grocery Leaders Executive Forum (thought leadership from senior executives on the major issues post-COVID that have affected grocery); our first-ever Retailer of the Century Awards (a celebration of the food retailers that have had the greatest influence on the industry over the past 100 years); and PG’s renowned Top Women in Grocery extravaganza (the most prestigious honor for female leaders in the grocery industry).

In another forum session, McMullen explained the reasoning for his company’s planned merger with Albertsons. He said that he prefers the term “merger” to the idea of an “acquisition,” because both companies have something to offer the other.

“You’ll never hear me use the word ‘acquire,’ McMullen said. “To me, it’s about merging and bringing out the best of both companies. As long as we’re humble enough, I guarantee you there are a lot of things that Albertsons does better than us. Hopefully, we’ll find some things that we’re better at as well. Together, we can create something that neither party can do individually.”

A couple of weeks after appearing at PG’s forum, McMullen and  Albertsons CEO Vivek Sankaran headed to Washington, D.C., to answer congressional questions over the merger.

As I look back on my first year as editor-in-chief of PG, our triumphant Grocery Industry Week, and everything that my incredible team of editors — Bridget, Senior Editor Lynn Petrak, Digital Editor Marian Zboraj and Multimedia Editor Emily Crowe — have accomplished, I’m so thankful to work with such talented and wonderful people. I’m so grateful to have been given the opportunity to spend my days thinking about the evolution of grocery e-commerce, the resilience of supply chains and the future of in-store experience. And I’m exhilarated for what’s to come.