As the 2010s progressed, every aspect of the grocery industry experienced change at an ever quickening pace. Much of it was driven by advancements in technology, whether it was artificial intelligence, machine learning, cloud computing, frictionless store experiences, or automation and autonomy. Most significant, though, was the adoption of e-commerce in the grocery world early in the decade, which was then accelerated by the COVID-19 pandemic over the past two years.

To help food retailers navigate the rapidly evolving landscape — which would soon include Amazon —  Progressive Grocer noted in December 2014, “Grocers must merge the best aspects of traditional and digital retailing — and those that don’t, put their future at risk.” 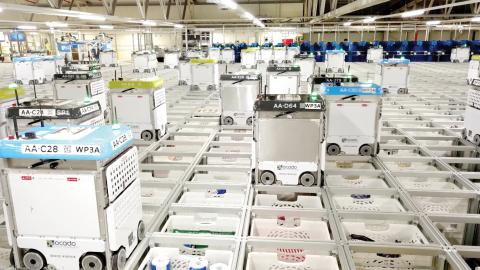 Many grocers appreciated the risk and made notable moves to position themselves to win with digitally engaged shoppers. Retailers such as Albertsons, SpartanNash, Walmart, Ahold Delhaize USA and Sedano’s experimented with micro-fulfilment centers. Others, such as Whole Foods Market and Farmstead opted for the dark-store approach to online order fulfillment. On the other end of the fulfillment spectrum, The Kroger Co. launched an exclusive partnership in 2018 with U.K.-based online supermarket Ocado that would see Kroger open heavily automated facilities measuring upwards of 300,000 square feet, with plans for a network of up to 20 facilities nationwide.

Increased adoption of e-commerce and new expectations that had been set by Amazon regarding the immediacy of delivery created a new operational challenge for grocers. Filling the void for grocery delivery were new companies such as Instacart and Shipt, which relied on crowd-sourced labor to pick and deliver orders. Other delivery platforms, such as DoorDash and Uber, launched grocery delivery services as well.

More recently, new expectations regarding delivery speed have been set by the rise of so-called instant-needs delivery services, including the likes of Buyk, DoorDash, Gopuff, Gorillas and Jokr. 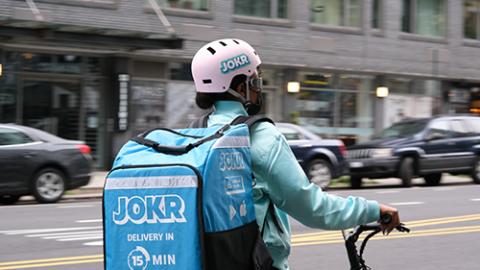 Instant-needs delivery services such as Jokr narrowed the delivery window of order arrival.

Beyond the rise of e-commerce, the decade witnessed the changing nature of competition on two fronts. Retailers such as Walmart, Target, Dollar General, Family Dollar and the warehouse club chains had become dominant outlets for food sales, siphoning trips from conventional grocers. Recognizing the shift, FMI rebranded itself in January 2020, prompting PG Editorial Director Mike Troy to write, “With a familiar acronym but a more comprehensive, consumer-centric view of the marketplace, FMI — The Food Industry Association has established a much-needed vision to ensure its relevance for generations to come.”

Meanwhile, early in the decade, food away from home surpassed food at home in the share-of-stomach battle, with grocers often finding themselves competing against restaurants. However, market share lost to foodservice operators was quickly regained when the pandemic began in early 2020 and homebound Americans rediscovered cooking. PG’s “What’s Next for the Way America Eats” research revealed that many Americans enjoyed cooking again and planned to continue doing so. The public-health crisis brought other changes to food retailing as well, prompting an often-heard comment that trends already in motion were accelerated by five to 10 years.

COVID-19 also spurred record rates of sales growth among companies on The PG 100’s ranking of North America’s largest retailers of food and consumables, “which meant that the combined sales of PG 100 constituent companies increased 11.6% to $2,113 trillion, compared with $1,893 trillion last year,” according to the May 2021 issue.

That rate of growth proved unsustainable, but the chaos of a pandemic and the changes it wrought proved a fitting way for PG to end the final year of its first century. As a new century begins, students of grocery industry history will recognize that unforeseen challenges will emerge, as will opportunities that are unimaginable today.

The 2010s saw a clash of the titans as new mega-deals emerged.