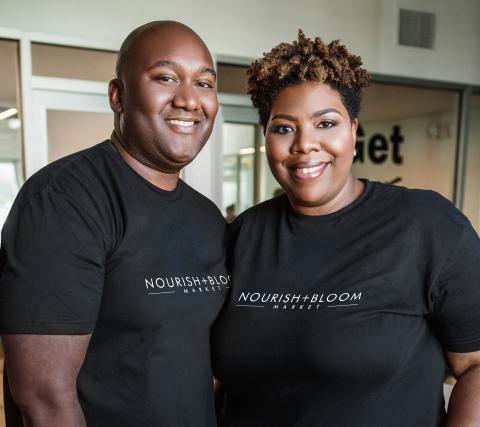 Nourish + Bloom Market, set to open in the Town at Trilith development in Atlanta suburb Fayetteville, Ga., on Jan. 21, has the distinction of being the world’s first Black-owned autonomous grocery store, according to founders Jamie Michael Hemmings and Jilea Hemmings. The contactless location, which will offer Trilith residents robotic delivery, is also the first autonomous grocery store to open in the South.

The Hemmings have created a format in which customers use an app to enter the store, pick up items and pay for them. An extensive network of cameras, shelf scales measuring the weights of each product, and AI technology enables the store to be accessible at all hours, carrying items from all categories, including produce, meat, baked goods, dairy and prepared meals.

Highly advanced bots will deliver a range of food and packages, with the ability to regulate hot and cold temperatures. Along with their high-tech learning abilities, robotic deliverers employ digital facial expressions and sounds to add fun and opportunities for interactions with residents and visitors.

According to the Hemmings, their tech partners at the store are UST, Shekel Brainweigh, Hitachi and Microsoft, while the delivery bots use LIDAR (Light Detection and Ranging) to map out the area and can travel up to 3 miles.

In keeping with both Trilith’s and Nourish + Bloom Market’s emphasis on sustainability, all of the curated food and personal care items meet the highest standards, with priority given to local brands to reduce the store’s carbon footprint.

The Town at Trilith is a 235-acre master-planned residential and mixed-use project in south metro Atlanta, adjacent to Trilith Studios, where such Marvel blockbusters as “Spider-Man: No Way Home,” “Avengers: End Game” and “Ant-Man” were created. Envisioned as a gathering place for creatives, artists, storytellers and makers, the European-inspired community will consist of 750 single-family homes, 600 multifamily lofts, 300 hotel rooms, and 270,000 square feet of restaurants, retail, office and commercial space. The residential neighborhoods at Trilith comprise the largest geothermal community in the United States, with 51% of the development dedicated to green space that currently features more than 1,000 trees.

A married couple, the Hemmings decided to enter the food industry after their eldest son was diagnosed with autism. Since diet was the one tangible way that they could ensure their son’s well-being, they began seeking quick, convenient healthy items and were frustrated by the difficulty they had in finding them.

In a video introducing the concept, Jilea Hemmings said that the goal was to open Nourish + Bloom stores across the United States because “the reality is that smart checkout and robotic delivery are the future, and nobody likes waiting in line or fumbling to find their form of payment.” At the same time, she vowed that the stores would preserve the human element, “even with all the technology advancements that are coming [consumers’] way.”

The Hemmings told Progressive Grocer that they were looking to open 400-plus Nourish + Bloom Markets, which would all operate 24/7.