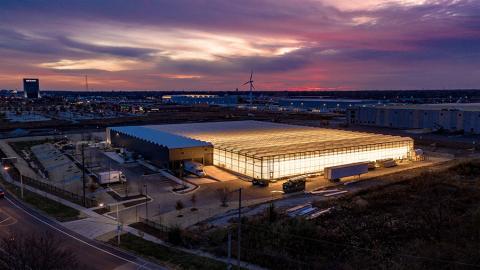 The new 100,000-square-foot greenhouse is Gotham Greens’ second in the Pullman neighborhood of Chicago, and its sixth nationally

Indoor greenhouse agriculture company Gotham Greens has opened its largest greenhouse in Chicago. The expansion enables the supplier to deliver a year-round supply of fresh produce to keep pace with growing demand from Midwestern retail, restaurant and foodservice customers.

“Gotham Greens’ expansion in Chicago demonstrates its continued commitment to the city, state and region by creating new jobs and using its high-tech greenhouses to grow high-quality produce, even during the coldest winter months,” said Illinois Gov. J.B. Pritzker. “Agriculture is a vital component of our state’s economy, and I’m pleased to see opportunities for urban agriculture – like this greenhouse expansion. Investing in innovative solutions will keep Illinois at the forefront for decades to come and help create good jobs that can support a family.”

“Since 2009, we’ve worked to transform how and where fresh produce is grown to provide more people with access to local, sustainably grown produce that is as delicious as it is nutritious,” said Viraj Puri, co-founder and CEO of Brooklyn, N.Y.-based Gotham Greens. “After opening our first greenhouse in Chicago in 2015, we have received tremendous support from retailers, restaurants and shoppers alike who love that we can provide a reliable, year-round supply of fresh produce that’s grown locally. We’re thrilled to open our second greenhouse in Chicago to expand our production and distribution in the Midwest and bring our delicious leafy greens, herbs and fresh food products to even more people.”

The company will double its workforce to about 100 full-time employees in Chicago and 300 nationwide.

By the end of this year, Gotham Greens will operate 500,000-square-feet of facilities across five states. The company currently has six greenhouses in New York City and Chicago, and plans to open new facilities in Providence, Baltimore and Denver.

Fellow hydroponic grower BrightFarms, based in Irvington, N.Y., is also increasing its reach, having recently revealed that it will build its next greenhouse in Henderson County, N.C., and expanding distribution to more than 100 Midwestern independent grocers.

Further, controlled-environment agriculture (CEA) producers have formed a coalition to work with the government, academics and industry leaders to strengthen food safety standards for leafy greens.