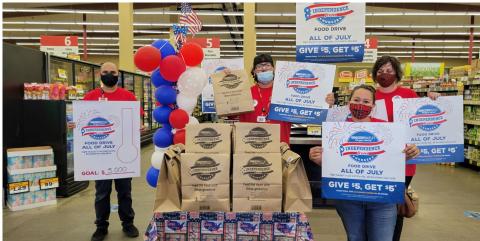 Ensuring that all families have access to high-quality meals,Grocery Outlet Bargain Market has raised more than $2.8 million — the equivalent of approximately 1.4 million meals — for families in need during its 11th annual Independence from Hunger Food Drive campaign. From June 23 through July 31, more than 400 Grocery Outlet stores raised funds and collected monetary donations from customers, employees and independent operators to give back to local food agencies to help address food insecurity in their communities.

Organizations that combat food insecurity face the highest demand during the summer, when many families lose access to school-supported food programs. The Independence from Hunger campaign has helped combat this issue by collecting more than $14 million in total donations nationwide since its launch in 2011. Throughout the initiative, Grocery Outlet customers and employees were encouraged to contribute to the campaign by:

“For the past 75 years, we have worked to uphold our ultimate goal of giving back to our local communities in which we operate, and our annual Independence from Hunger campaign is an integral part of that commitment,” said Eric Lindberg, CEO of Grocery Outlet. “We are honored to receive the unwavering support and commitment from our local partners, allowing us to be one step closer to eliminating food insecurity for all families across the nation.”

Based in Emeryville, Calif., Grocery Outlet has 400 stores in California, Washington, Oregon, Pennsylvania, Idaho and Nevada. The company is No. 69 on The PG 100, Progressive Grocer’s 2021 list of the top food and consumables retailers in North America.