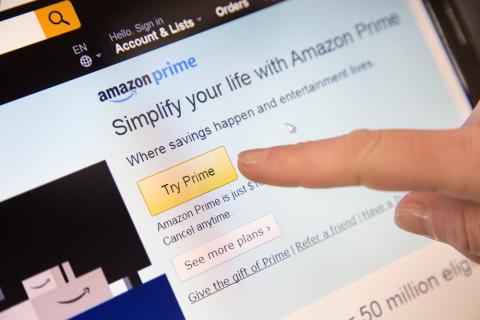 Amazon is opening its Buy with Prime benefit to all eligible merchants as of Jan. 31.

Innovation and disruption have been hallmarks of Amazon’s business model since the beginning. Some of the retail giant’s latest tools and technologies demonstrate its continued efforts to influence the buying experience.

In December, for example, the company introduced Amazon Inspire, a video and photo feed that resembles the popular TikTok social platform. Users can get started by choosing their interests, like cooking or gardening, and shop as they scroll photos and videos that show up on screen.

Through this shoppable feed, customers can get more detail about relevant products, while brands can target users to buy their products via Amazon. Brands that are a part of Amazon’s brand registry and active in the Amazon Store are eligible to be included on Amazon Inspire, as are those enrolled in the Amazon Influencer Program.

As that feature continues to be rolled out over the next several weeks, some observers claim that the feature is a win for brands. “Inspire shows customers products that match their personal interests, so it’s a great way to increase brand awareness. It’s also a good opportunity to work with Amazon Influencers because viewed within the Inspire feed,” declared Brian Connolly, an Amazon seller and e-commerce expert at Jungle Scout, a platform that provides SaaS-based tools for selling on Amazon and online marketplaces.

While consumers are getting familiar with the latest app feature, Amazon is also assessing the results of its Buy with Prime benefit. The benefit was introduced last April as way for Prime members to shop directly from merchants’ online stores and access free delivery and easy returns. “Allowing merchants to offer Prime shopping benefits on their own direct-to-consumer online stores is an exciting part of the Buy with Prime mission to help merchants of all sizes grow their business whether on Amazon or beyond,” explained Peter Larsen, VP, Buy with Prime in a recent blog post.

According to Amazon data, Buy with Prime has been shown to increase shopper conversion by 25% on average. Larson pointed out that some merchants have reported even greater conversion rates.

The program, which was first offered to merchants on an invitation-only basis, will be available to all eligible merchants in the United States as of Jan. 31. Also new: the ability to share customer reviews from Amazon.com on a merchant’s online store.

“We’ve been working closely with merchants since launching Buy with Prime, and we’re thrilled to hear that the program has helped drive such impressive results so far. We’ll continue innovating and investing in new features and tools to help merchants of all sizes succeed — and give Prime members the shopping benefits they love, whether it’s on Amazon or beyond,” Larson said.

Meanwhile, Amazon is working on its own internal efficiencies as economic conditions remain volatile. The company’s latest round of 18,000 layoffs started on Jan. 18. There are also reports of so-called Amazon Fresh “zombie stores” that appear close to completion but have yet to open. The company has not commented publicly on those delays.