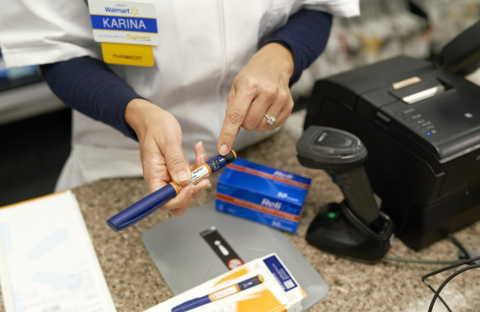 Walmart is doing its part to help lower the prices of insulin by offering private label products through a partnership with Novo Nordisk.

The cash price for insulin has been steadily increasing in the U.S., and Walmart Inc. is doing its part to help Americans with diabetes feel some relief. Through a partnership with Novo Nordisk, the retailer is selling insulin products under its private ReliOn label that saves customers up to 75% off the cash price of branded analog insulin.

The average cash price for insulins in the U.S. has risen more than 40% over eight years, and one in four individuals with type 1 or type 2 diabetes was forced to ration their insulin because of the high cost, wrote Dr. Cheryl Pegus, EVP of Walmart Health & Wellness, in a company blog post, citing research from Yale and GoodRx Health.

“Ensuring access to affordable insulin is a goal we can and should achieve collectively,” Pegus wrote. “We are encouraged to see lawmakers at the federal and state levels recognize the urgency to make insulin more affordable.”

According to Pegus, federal and state laws limiting copayments for insulin will help Americans with insurance, but the retailer is looking to do more for those whose insurance doesn’t cover insulin or the millions of Americans without insurance. “At Walmart, we are using our size and scale to bring down costs for our customers who must pay out of pocket for insulin, providing a more affordable option for those who can’t benefit from copay limits,” Pegus wrote.

To that end, Walmart and Sam’s Club pharmacies are offering ReliOn private label Novolog injection in vials and FlexPens at a savings of up to $101 per vial of branded FlexPen, regardless of a shopper’s insurance status.

As another means of better providing for patients with diabetes and to help businesses and other institutions support their employees’ health, Walmart Health’s Virtual Care Diabetes Program will help employers and payors assist employees and members in closing gaps in diabetes management for themselves and their families through early intervention.

Each week, approximately 230 million customers and members visit Walmart’s more than 10,500 stores and numerous e-commerce websites under 46 banners in 24 countries. The company employs approximately 2.3 million associates worldwide. Walmart U.S. is No. 1 on The PG 100, Progressive Grocer’s 2022 list of the top food and consumables retailers in North America.