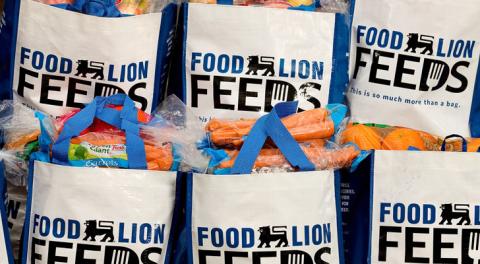 Grocers are giving back this spring through several initiatives aimed at helping local food banks and those in need.

Food Lion Feeds, the company’s hunger relief platform, has donated $1 million to help fund a new location for the Second Harvest Food Bank of Metrolina. The facility will be located in Salisbury, N.C., and will facilitate agency food distributions and food pantry partners across three counties, as well as disaster preparation and support for food banks throughout North Carolina and Georgia.

“We’re privileged to be able to support this new facility and honored to be a 34-year partner with Metrolina,” said Kevin Durkee, manager of Food Lion Feeds. “Working with Metrolina’s amazing team, we have made it our mission to shine a light on our neighbors in this region who are food insecure and in need of a helping hand and a little bit of hope.”

Food Lion Feeds has donated more than 900 million meals to those in need since 2014 and plans to donate 1.5 billion meals by 2025.

“Second Harvest Food Bank of Metrolina could not ask for a better partner in ending hunger than Food Lion,” said Kay Carter, CEO of Second Harvest Food Bank of Metrolina. “They have supported our efforts for decades assisting with our expansion in Charlotte and now helping insure the development of our next major site in Rowan County. Everyone at the food bank is excited to see how many more hungry people we can serve in Rowan and the surrounding counties all thanks to the generosity of our neighbors, Food Lion.”

Meanwhile, Hy-Vee and its Dollar Fresh Market have launched a “Food Bank Fridays” campaign as part of its One Step Initiative to support local food banks across its eight-state market. Shoppers will be invited to make $1 or $5 donations, all of which will benefit community food banks, and the grocer will feature a different food bank on its social media channels each Friday during the campaign.

“This fundraiser is just one example of Hy-Vee’s ongoing initiative to eliminate food insecurity in the communities we serve,” said Randy Edeker, Hy-Vee chairman and CEO. “We hope our customers, community partners and suppliers will join us in this effort which will have a major impact on the lives of many.”

Salisbury, N.C.-based Food Lion has more than 1,100 stores in 10 Southeastern and Mid-Atlantic states, and employs more than 82,000 associates. Its parent company, Ahold Delhaize USA, a division of Zaandam, Netherlands-based Ahold Delhaize operating more than 2,000 stores across 23 states, is No. 10 on The PG 100, Progressive Grocer’s 2021 list of the top food and consumables retailers in North America. Employee-owned Hy-Vee has a team of more than 93,000 employees and operates 285-plus retail stores across eight states. The West Des Moines, Iowa-based company is No. 34 on The PG 100.