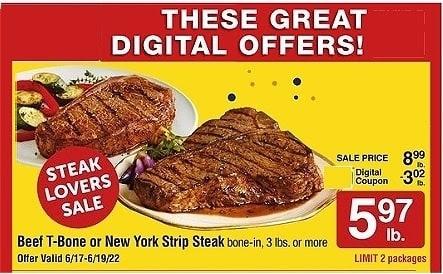 The amount that a digitally disconnected shopper overpays can be significant.

Digital-only discounts can provide significant savings for connected shoppers. However, there are many shoppers who are incapable of accessing these deals, causing them to overpay on essential grocery items during a time of record inflation.

This is the basis for a letter by a coalition of national consumer organizations that is addressed to the presidents of a dozen large supermarket chains. Specifically, the Nov. 15 letter urges these food retailers to stop discriminating against senior citizens and low-income shoppers who can’t take advantage of advertised digital-only in-store discounts, because millions of them don’t have internet access or smartphones.

Linking in-store promotions to a digital loyalty program is a big trend in food retail. These programs require shoppers to go online first to electronically "clip" the offers to add them to their loyalty card account to be charged the sale price in the store.

However, since 25% of seniors don’t use the internet and 39% don’t have smartphones, according to a 2021 study by the Pew Research Center, they’re effectively shut out of these deals. Similarly, 43% of low-income households lack broadband internet access.

Not only are people without internet access shut out of digital discounts, so are the one in four shoppers who, despite having online access, may lack the technical ability to use a supermarket’s website or app, according to a recent survey by Consumer World.

"It’s digital discrimination, and the most vulnerable people are being shut out of these online discounts at the worst possible time, given record-high inflation," explained Edgar Dworsky, founder of Consumer World. "Big supermarkets need to provide an offline alternative to the digitally disconnected so they can reap the same savings that connected shoppers enjoy."

The consumer groups have suggested multiple ways that supermarkets can offer an in-store offline alternative to digital-only deals to accommodate both the digitally disconnected and the digitally challenged shopper, including: