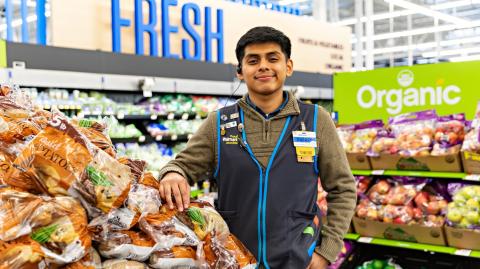 Walmart President and CEO Doug McMillon thanked associates "for their hard work and creativity" during the company's Q1 of fiscal 2023, which saw strong top-line growth.

For its first quarter of fiscal 2023, as shoppers sought value in the face of rampant inflation, Walmart delivered robust top-line growth globally, reporting total revenue of $141.6 billion, up 2.4%, or 2.6% in constant currency. However, growth was negatively affected by $5.0 billion because of divestitures, and $0.4 billion from currency, according to the Bentonville, Ark.-based company. Walmart U.S. comp sales grew 3.0% and 9.0% on a two-year stack, gaining market share in grocery, while e-commerce growth was 1%, or 38% on a two-year stack.

Sam’s Club’s sales were a particular bright spot, with comps increasing 10.2%, and 17.4% on a two-year stack, while membership income increased 10.5%. On the other hand, Walmart International net sales were $23.8 billion, a decrease of $3.5 billion, or 13.0%, which Walmart said were negatively affected by $5.0 billion because of divestitures, and $0.4 billion from currency fluctuations. There were positive comps across all markets, however, and the company’s global advertising business grew more than 30%.

“Across our businesses, we had a strong top-line quarter,” noted Doug McMillon, president and CEO, Walmart. “We’re grateful to our associates for their hard work and creativity. Bottom-line results were unexpected and reflect the unusual environment. U.S. inflation levels, particularly in food and fuel, created more pressure on margin mix and operating costs than we expected. We’re adjusting and will balance the needs of our customers for value with the need to deliver profit growth for our future.”

As a result of its Q1 quarterly performance, the company raised its guidance for consolidated net sales and comp sales growth, assuming a generally stable U.S. consumer, higher supply chain costs, continued pressure from inflation, and mix of products and formats globally. Walmart adjusted its consolidated operating income and earnings per share slightly downward, while its effective tax rate and cap ex remained the same.

Each week, approximately 230 million customers and members visit Walmart’s more than 10,500 stores and numerous e-commerce websites under 46 banners in 24 countries. The company employs approximately 2.3 million associates worldwide. Walmart U.S. is No. 1 on The PG 100, Progressive Grocer’s 2022 list of the top food and consumables retailers in North America.