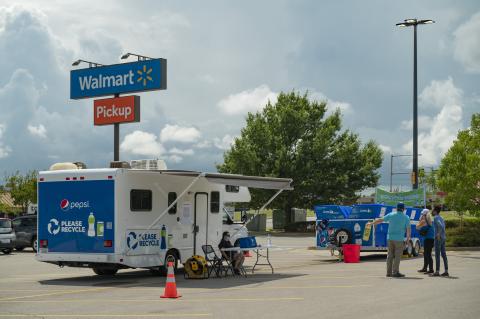 PepsiCo Beverages North America said that providing on-site recycling at four Tulsa-area Walmart and Sam's Club locations will be the first step in building out a decentralized recycling network in Oklahoma.

Under the pilot, which launched late last month, shoppers can bring their beverage containers to be properly recycled from Thursdays to Sundays, with encouragement to participate through the chance to earn rewards and prizes.

Currently, Oklahoma has just one mixed recycling facility for the state’s nearly 4 million residents. According to PBNA, providing on-site recycling at these stores will be the first step in building out a decentralized recycling network, which will make recycling more accessible for all Oklahoma residents.

The collection of recyclable materials and plastic bottles become part of a “closed loop,” maximizing recycling convenience and increasing access to clean rPET (recycled polyethylene terephthalate). This will ultimately support a circular economy and help further the shared mission of PepsiCo, Sam’s Club and Walmart to achieve 100% recyclable or compostable packaging by 2025.

“The partnership demonstrates a collective commitment from the three companies to create positive change for consumers and the planet, proving that small acts can have a big impact,” said PBNA.

Walmart and Purchase, N.Y.-based PepsiCo have also recently teamed on Every Day Heroes, a joint recognition effort to engage customers in celebrating exemplary Walmart associates who serve their communities, their customers and their teams.

Bentonville, Ark.-based Walmart operates more than 10,500 stores under 48 banners in 24 countries, and e-commerce websites, employing 2.2 million-plus associates worldwide. Walmart U.S. is No. 1 on The PG 100, Progressive Grocer’s 2021 list of the top food and consumables retailers in North America, while Walmart-owned Sam’s Club ranks No. 9 on the list.