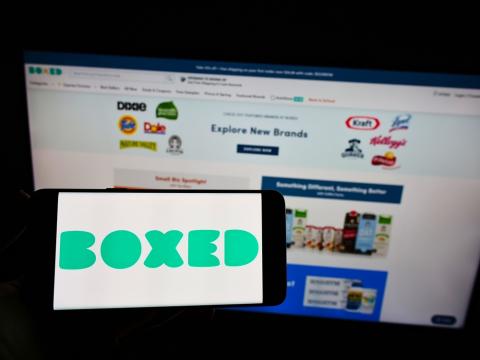 There’s been a lot of buzz about Boxed since the company was founded in 2013. The digital first, limited assortment retailer billed itself as a new age warehouse club that didn’t charge fees and was poised to siphon customers from established players such as Costco, Sam’s Club and BJ’s Wholesale.

Boxed hasn’t lived up to the hype as its recent sales and performance metrics clearly show. Boxed revenues for 2020 increased 7.6% to $187.2 million, according to an Oct. 22 filing with the Securities and Exchange Commission by Seven Oaks Acquisition Corp. Boxed and Seven Oaks, an entity known as a special purpose acquisition company, or SPAC, on June 13 approved a deal that would enable Boxed to become a publicly held company if the entities can close the transaction by Dec. 22.

Although Boxed appeared well-positioned to benefit from shoppers’ pandemic spending behaviors, the company said its 2020 sales performance was hindered by exposure to B2B customers who ordered fewer products when employees began working from home. Demand for the Boxed brand of retailing also struggled through the first half of this year. Revenues during the six-month period ended June 30 declined 19.4% to $83.2 million despite a 682% boost in advertising expense that saw the company spend $9.4 million, or 11.4% of revenues, on advertising, according to the Seven Oaks SEC filing.

Boxed explains the weakness by a decline in the company’s active customer base, which on a trailing 12-month basis, dropped to 415,000 from 527,000. The loss of B2B customers was cited as a reason. One bright spot for Boxed was that its average order value for the past 12 months increased to $115 from $101. For the full year, Boxed provided estimates to Seven Oaks which show 2021 full year revenues are projected to be $212 million, a 13.4% increase aided by a new revenue stream of software and services related to licensing agreements.

“The Seven Oaks Board believes that Boxed is well-positioned to continue expand its B2C customer base while significantly increasing sales to its B2B customers as businesses increasingly return to the office following work-from-home arrangements during the height of COVID-19,” according to the SEC filing. “Revenue acceleration is further supported by Boxed’s strong customer retention metrics, growth in its ‘Boxed Up’ loyalty subscription program, and expansion of its private label brand Prince & Spring.”

The combination of those factors is expected to help Boxed achieve revenues of slightly more than $1 billion within five years, according to estimates the company shared with Seven Oaks that were disclosed in the most recent SEC filing. Although Boxed plans to grow by licensing its software to retailers globally, its core business representing more than 90% of revenues involves selling a limited assortment of 2,500 items, roughly 1,000 to 1,500 products fewer than are available Costco or Sam’s Club. Of those items, approximately 125 are the company’s owned brand Prince & Spring, which accounted for 14% of sales in 2020.

“With a 600 basis point margin advantage over our nationally branded products, we believe our private label products will be long-term drivers of revenue, customer retention, and profitability,” according to the SEC filing. “High quality products, combined with strong relative value, result in private brand loyalty from our customer base, with 55% of orders from repeat customers containing a Prince & Spring product.”

The company can deliver 90% of its orders within two days from fulfillment centers of unspecified sizes located in Union, N.J., Las Vegas and Dallas. Customers who pay a $49 annual fee to be part of the Boxed Up loyalty program can receive free deliveries. As of June 30, the company said it had 36,000 Boxed Up members.

Finding white space in the U.S. retail market, especially one served by Costco and Sam’s Club, isn’t easy. But Boxed believes it sees an opening based on how it has segmented households as, Backroaders, Small Towners, Pleasantvillers and Urbanites. The Backroaders and Small Towners comprise 69% of the Boxed customer base and the company sees, “these two customer categories as core growth opportunities as we believe these groups remain underserved for e-commerce grocery.”