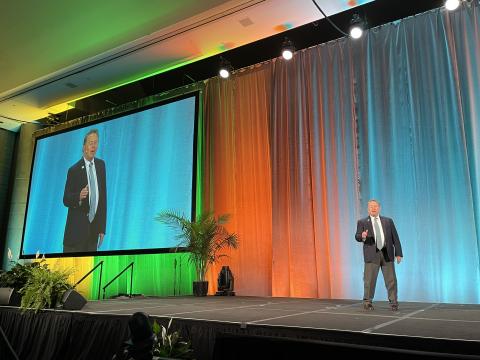 IDDBA President and CEO Mike Eardley spoke at the 2022 IDDBA Show in Atlanta.

To become a destination for customers to satisfy all of their future meal needs, retailers need to prioritize three areas of investment, according to IDDBA President and CEO Mike Eardley.

He was a keynote speaker at this year’s IDDBA Show, which showcased the innovations happening in dairy, deli and bakery. The show was held in Atlanta this week after a two-year COVID 19-related pause, and featured 10,000-plus attendees and more than 800 exhibiting companies.

Eardley outlined three keys areas of investment food retailers should be making now: people, technology and the future of the deli and bakery.

Citing the current labor crisis, he mentioned all of the grocery industry, “from buyers of products to sellers of product to distributors of product need to become totally involved in the investment in the people who will grow our future.”

He said “trained, motivated and fairly compensated people” can deliver the value that today’s shoppers are looking for.

“The easy decision would be to go all self-serve, repackage grab-and-go, eliminate the value of customization. But doing that would or could be the elimination of the things that made our departments grow exponentially over the last 30 years, creating value for both the customer and the store,” Eardley said. “Don't give up: Find the bakers and the deli specialists. Show them a future that gives them a career and a trade possibly for their lifetime. What better place to make your investment than in the people who will grow your future and make your customers lives easier?”

In the area of technology, Eardley said a lot of retailers are focused on e-commerce but are ignoring developments in the area of virtual reality and specifically cryptocurrency.

Grocers need to “have a better understanding of crypto and the role that it could be playing in our world, in our future, and in our technology future,” Eardley said. “Cryptocurrency, likely, isn't going to replace the dollar, or at least not any time soon. But cryptocurrency as well as blockchain has potential we ignore.”

During his speech, Eardley showed a video in which a reporter from The Wall Street Journal walked around New York City trying to find a retailer that accepted bitcoin as a form of payment. Out of nearly a dozen or so retailers, only one did.

In addition to urging retailers to accept crypto payments, Eardley also talked about the opportunities in blockchain.

“Blockchain didn't exist before 2009,” Eardley said. “Blockchain has the potential to store things like medical records. Plus, in the grocery industry, blockchain could be used to easily identify the exact products needed to be pulled in a recall.”

The third critical area of investment for retailers should be in designing and developing the deli and bakery of the future.

He said grocers need to understand which items in the perimeter the customer will be comfortable sourcing online and which they will want to purchase in-person.

In addition, “the deli may in be in a perfect position to thrive. Customers are likely to value the convenience, variety and low cost of supermarket deli offerings,” especially in the current inflationary environment.

“Retailers should invest in the next generation of deli operations,” Eardley said. “Great deli operations have the opportunity to become the town squares of their community. Not only to be a formidable business, but also a magnet that attracts customers to the overall store.”

Bakeries and delis have primarily focused on individual customer customization and filling specialized needs, he said. But now that customization needs to evolve, stressed Eardley.

“Do you want one cupcake or do you want a dozen? What colors on your cake will match your theme? Bread? Sliced or whole? Deli meat? Thin or thick? One ounce, 10 pounds? Specialty products from around the world, or home style potato salad and baked beans. The finest charcuterie from Italy or Spain, or ham from Virginia, cheddar cheese to serve with beer?” Eardley said, in explaining that shoppers want more options than ever before.

When it comes to foodservice, shoppers’ definition of “value” has evolved.

“What is the customer looking for, how are they defining value? To them value is focused on speed and saving their time. Is it ready to heat meals, ready to cook, ready to eat with a place to sit? Our departments are all about delivering levels of value as defined by the customer, not by us. But I still believe that the customer sees a value in a well run bakery or deli that's focused on answering their needs, while delivering an experience that gives them some education or entertainment.

“We built an experience for customers that gives them value, delivering what they want, how they want it, when they want it, and where they want it. Now we need to do it for the next generation,” Eardley concluded.