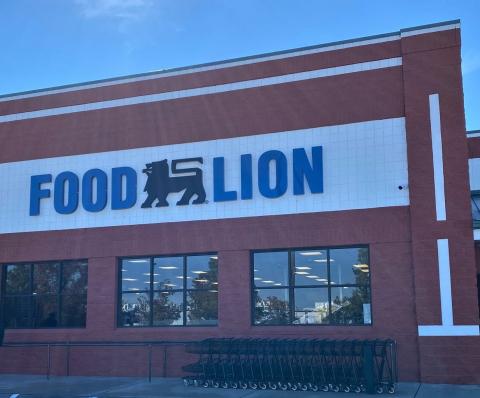 Food Lion has opened its fourth new store this year, in Cleveland, N.C.

Located at 11745 Statesville Boulevard, the new store features an extensive product assortment, including a variety of grab-and-go options. Customers have a selection of organic, gluten-free and plant-based items to choose from, including Nature’s Promise-brand items, which are Food Lion’s affordable brand of wholesome and organic products made with no artificial flavors, preservatives or synthetic colors.

The store touts a wide variety of local offerings, such as root beer from Uncle Scott’s and Abby’s Better Nut Butters, both made nearby in Mooresville, N.C.

“I’ve lived in Rowan County for 40 years, and I’m very excited about opening this new store to make it easier for our neighbors in Cleveland to shop at Food Lion,” said Robert Jackson, store manager of the new location. “I enjoy the personal interaction and bringing smiles to others in my community. It’s an honor and a pleasure to serve and nourish our neighbors, and I’m looking forward to meeting more members of our community in our new store.”

Nonprofit Rowan Helping Ministries will regularly collect food from the store to distribute to neighbors in need through Food Lion Feeds’ food rescue program, in which food safe for human consumption is donated to a local feeding agency before the food spoils. Food Lion Feeds is the omnichannel retailer’s hunger-relief initiative, which has donated more than 970 million meals to neighbors in need since 2014.

The new Food Lion officially opened on Nov. 2, following a 7:45 a.m. ribbon-cutting ceremony. After the ceremony, the first 100 customers in line received a mystery gift card valued at up to $200, and a free reusable shopping bag.

The Cleveland store will be open daily from 7 a.m. until 11 p.m.

Also in North Carolina, Food Lion opened a new store in the Wesley Chapel neighborhood of Charlotte in late June.

Salisbury, N.C.-based Food Lion has more than 1,100 stores in 10 Southeastern and Mid-Atlantic states, and employs more than 82,000 associates. Its parent company, Ahold Delhaize USA, a division of Zaandam, Netherlands-based Ahold Delhaize is No. 10 on The PG 100, Progressive Grocer’s 2022 list of the top food and consumables retailers in North America.